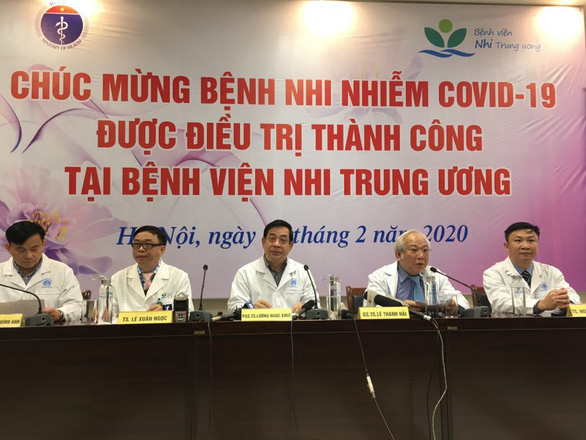 A three-month-old baby girl from the northern province of Vinh Phuc, the 15th and youngest confirmed novel coronavirus disease (COVID-19) patient in Vietnam, is now out of the hospital after being successfully treated.

The infant allegedly contracted the disease from her grandmother, P.T.B., after staying at the latter’s house for four days.

B. was the 10th confirmed COVID-19 patient in Vietnam after having interacted with her 25-year-old neighbor, N.T.D., who previously tested positive for the virus after returning from a vocational training seminar in the Chinese city of Wuhan – ground zero of COVID-19.

The infant had tested positive for the virus and was admitted to the Vietnam National Children's Hospital on February 11.

During treatment at the infirmary, L. was sampled twice - on February 14 and 17 - the results of which all returned negative for the virus.

As the little patient has been clear of all disease symptoms with her biochemical and hematological parameters all being within the normal range, she has been released from the hospital.

A COVID-19 patient is allowed to be discharged from the hospital only after their fever has ceased for at least three days and at least two samples, taken one day apart, test negative for the virus, according to a treatment guidance issued by the Ministry of Health.

L.’s mother, who was by her child’s side during the entire hospitalization, has not been infected as three test results of her samples have returned negative, doctors said.

L. and her mother will remain under home quarantine while the baby continues to recover at home, according to Le Thanh Hai, director of the Vietnam National Children's Hospital.

The novel coronavirus disease, named COVID-19 by the World Health Organization (WHO), has killed 2,126 people and infected over 75,700 globally since it first surfaced in the Chinese city of Wuhan in Hubei Province in December 2019, according to the South China Morning Post.

To date Vietnam has confirmed 16 cases of the viral infection, including 13 Vietnamese, one Vietnamese American, and two Chinese.

Among them, 12 have fully recovered and been discharged from the hospital, including L.

Vietnamese news site Zing quoted the Ministry of Health as saying three other patients, including one Vietnamese American hospitalized in Ho Chi Minh City and two patients in Vinh Phuc, have also recovered and are waiting to be released.

The two patients in Vinh Phuc are expected to be released on Thursday, while the patient in Ho Chi Minh City will be discharged on Friday, according to the Ministry of Health.

The remaining patient, who was only confirmed infected on February 13, is still under treatment, Zing reported on Wednesday.

Vietnam has reported no new case of COVID-19 infection since Thursday last week.

The country was lauded by the WHO to have responded well to the COVID-19 epidemic in a statement released by the organization recently.

While the U.N. health agency spoke highly of Vietnam’s ability to address urgent public health issues, it also urged the Southeast Asian country to stay on high alert and be ready to respond should more infections be detected.