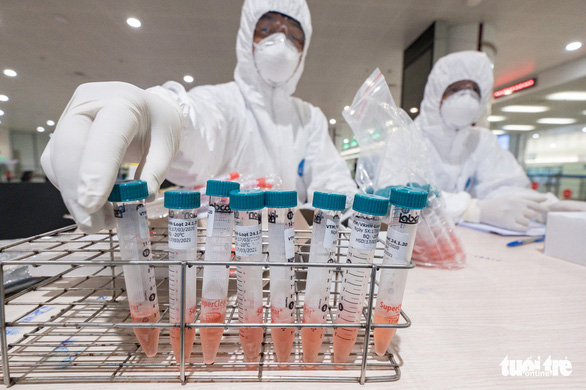 Vietnam’s tally of novel coronavirus disease (COVID-19) cases is now 169 after the Ministry of Health confirmed six new patients on Saturday morning, including two from a major hospital in Hanoi where three people had previously tested positive.

Among the other four patients are three Vietnamese returning from abroad and a Danish traveler who had been to different Vietnamese localities before she was diagnosed with the disease.

Patient No. 164 is a 23-year-old overseas Vietnamese student whose registered address is in Rach Gia City in the Mekong Delta province of Kien Giang.

They both returned to Vietnam from the UK on March 23 aboard flight VN0054, operated by Vietnam Airlines, that landed at Van Don International Airport in the northern province of Quang Ninh.

They were quarantined immediately after arrival and are currently treated at the Ninh Binh Province General Hospital.

Patient No. 166 is a 25-year-old Vietnamese woman, whose registered address is in Dong Phu Commune, located in Luc Nam District in the northern province of Bac Giang.

She had been staying in Thailand and left for Vietnam on March 20 in seat 40B aboard flight TG564, operated by Thai Airways.

She is also being isolated and treated at the Ninh Binh Province infirmary.

Patient No. 176 is a 20-year-old Danish tourist who was staying at a hotel in Hoan Kiem District, Hanoi. She traveled with a 22-year-old friend.

She and her friend arrived in Hanoi on March 8 in seats 37K and 37J aboard flight QR0976, operated by Qatar Airways.

They stayed at a hotel on Hang Chieu Street in Hoan Kiem District from March 9 to 12.

On March 12, they traveled on a sleeper bus operated by Ngoc Son Firm to Ha Giang City in the namesake northern province.

In Ha Giang City, they stayed at Jasmine Hostel in Phuong Thien Commune until March 15. They then returned to Hanoi and stayed at King Ly Hotel at No. 8 Ly Thai To Street in Hoan Kiem District.

They left Hanoi for Hue City in the central province of Thua Thien - Hue on March 17 on a sleeper bus.

In Hue, she and her friend stayed at Sunshine 3 Hotel at No. 10 Vo Thi Sau Street until March 19, then went to Hoi An City in the neighboring province of Quang Nam where they stayed at Hoi An Backpackers Hostel at No. 250 Cua Dai Street from March 19 to 23.

The Danish woman occupied seat 19E on Vietjet Air flight VJ530 traveling from Da Nang to Hanoi on March 23. Their flight landed at Noi Bai International Airport at 9:00 am that day and the duo continued to stay at King Ly Hotel.

As airlines started to require certificates proving a passenger is not carrying COVID-19 before boarding flights, she and her friend got tested for the virus at the Vietnam National Children's Hospital on March 24.

Her result returned positive for the virus while her friend’s turned out negative.

Both she and her friend are now quarantined at the National Hospital for Tropical Diseases in Hanoi.

They are employees in charge of supplying boiled water at Bach Mai Hospital in Hanoi, where thousands of people are being tested for COVID-19 after two nurses and a patient there were recently infected.

The hospital has isolated the patients and those in close contact with them, as well as disinfected its cafeteria.

Vietnam has announced 169 COVID-19 patients so far, with 20 having been discharged from the hospital by Friday.