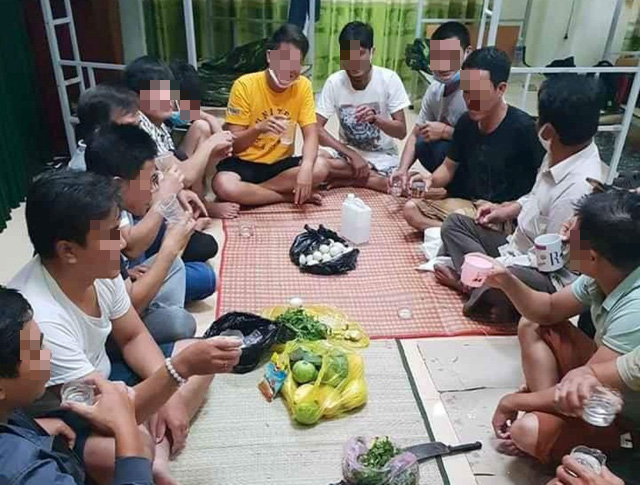 About 30 people are facing penalty after throwing a drinking party inside a quarantine camp in the north-central Vietnamese province of Quang Binh.

The incident happened at a quarantine facility in Minh Hoa District in Quang Binh.

The managing board of the quarantine camp is expected to decree a suitable punishment upon these people in the coming days, said Bui Anh Tuan, chairman of the Minh Hoa District administration.

Photos of about 30 men gathering to drink rice wine inside the isolation facility were uploaded to social media on Friday last week, while the nation was on its third day of practicing social distancing as per a prime minister directive.

Local authorities were informed of the incident and began probing the case.

All of the men hail from Tuy Hoa District in Quang Binh Province.

They were previously brought to the quarantine camp after returning from Laos via Cha Lo Border Gate in Minh Hoa District.

The men said it was considered a farewell party as they had almost finished their 14-day isolation period.

They had chipped in money to buy rice wine, food, and fruit online, and had the seller deliver the order to the quarantine facility, placing the items near the fence at the premises.

Some of the men were sent to fetch the foodstuffs to their room.

The novel coronavirus, which first emerged in the central Chinese city of Wuhan in December 2019, has infected over 1.27 million people and killed more than 69,400 globally as of Monday morning, according to Ministry of Health statistics.

Vietnam reported only one COVID-19 patient on Sunday, raising the country’s tally to 241, with 91 having recovered.

No new cases were announced on Monday morning for the second morning in a row.

Prime Minister Nguyen Xuan Phuc has asked in a directive that citizens practice social distancing from April 1 to 15 by refraining from going outside unless absolutely necessary and maintaining a minimum distance of two meters from others in social interaction.

Gatherings of more than two people outside of public offices, schools, hospitals, and in public spaces in general are also banned.