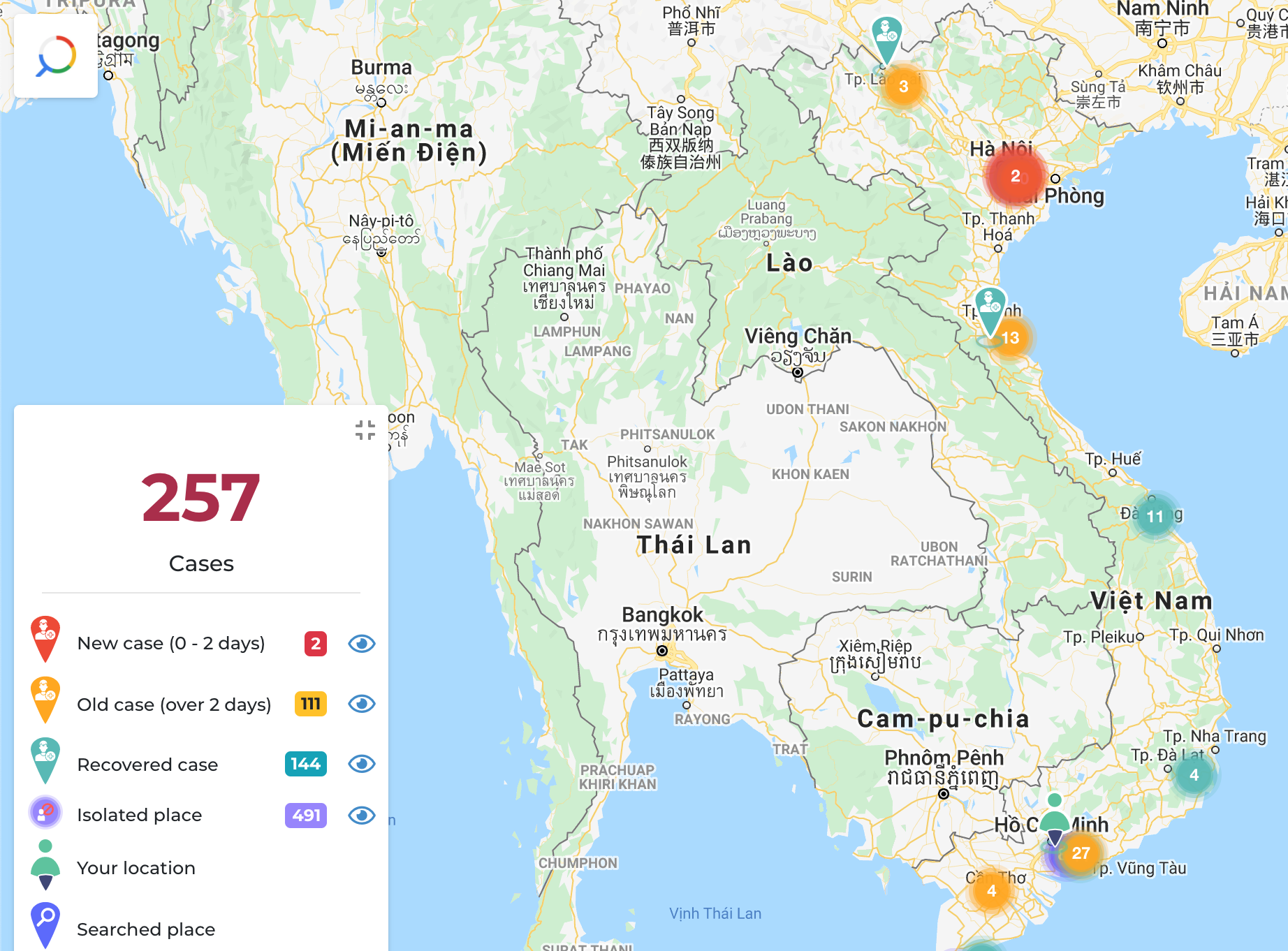 A team of Vietnamese nationals have spent their own time and resources developing a live map that provides visitors with a mine of information on novel coronavirus disease (COVID-19) in Vietnam.

The map, available at vietnamcovid19.info, provides live statistics of the total count of confirmed cases, with those confirmed within two days marked as ‘new cases’ and others as ‘old,’ and the number of recovered patients in the Southeast Asian country.

It also features a search tool allowing visitors to look up a confirmed case’s data including their general information, when and how they were infected, their travel history, and links with other patients.

“Visitors can also look up infection information of any place in Vietnam from the search tool, as well as locate quarantine camps countrywide,” Phong Pham, one of the four founding members of the team that runs the live map, told Tuoi Tre News via email.

The map is available in Vietnamese by default. A translation button was added on April 10, allowing visitors to switch to English.

Although only the most basic features are translated for now, the English version is readable enough for English-speaking users.

Phong refused to say much about himself and other members, introducing them only as a group of Vietnamese who want to do something for the country in this fight against the pandemic that has spread throughout the world.

The team has two members based in Hanoi and one each in the U.S. and Australia.

“This project was realized during our discussion on March 13, when there were only 44 confirmed cases in Vietnam,” Phong said.

“We knew the situation was much more worrying than it appeared, especially the high risk of community spread from patients No. 17 and 34.”

Vietnam’s 17th patient of COVID-19 is a 26-year-old resident in Ba Dinh District, Hanoi, while the 34th patient is a businesswoman based in Phan Thiet, the capital of the south-central province of Binh Thuan.

Both patients had returned to Vietnam from overseas and had traveled to different places, having contacted a number of people, before they were confirmed infected last month.

Both of them have been discharged from the hospital after weeks of treatment.

Phong said all of the founding members are taking managerial roles at projects in such fields as information and technology, data analysis, financial technology, and artificial intelligence, so they are well aware that “only by applying tech could we help spread information to the community in a rapid and accurate manner, contributing to combating the disease.”

The team also reached a consensus that a live map is the best way to keep the community updated on the disease’s spread and development.

Phong said the travel history of a patient plays a crucial role in efforts to prevent the coronavirus from spreading, particularly in Vietnam, where children meet their parents and grandparents more often than their Western peers do.

“It is therefore essential to keep the community updated on the patients and their contacts, and such information is best displayed on a map,” he elaborated.

Phong’s team had taken references from some live maps in other countries, with those in Singapore and South Korea standing out as they both let visitors know how the infected are linked to one another.

“Except for these references, we had to design and build all the features of our map from scratch,” Phong said.

Phong said during the first days of the live map’s launch, human and financial resources were their biggest challenges.

The map is powered by Google’s web mapping service Google Maps, and the team had to pay for every expense to keep the platform online.

The team members also had to devote time to the project while running their respective day jobs.

“We voluntarily dedicated our time, money and efforts to this project as a joint contribution to the country’s fight against COVID-19,” Phong said.

Asked if his team has to closely watch such official data and manually update the map, Phong said most of the information on his platform is automatically updated.

“The credit goes to our head developer and IT team, who have years of experience in managing major tech companies,” he added.

“With the statistics automatically updated from official sources such as the government and the health ministry, we only need one admin to handle the extra information on the patients.”

Since going live, the map has been constantly added with new features.

It was recently added with a dashboard for users to access more in-depth data about the pandemic not only in Vietnam but globally as well.

Phong underlined that the real-time and accurate information available on their platform makes it a useful source of data for individual and corporate users to “make the best possible health and travel decisions for themselves, their employees, and their businesses.”