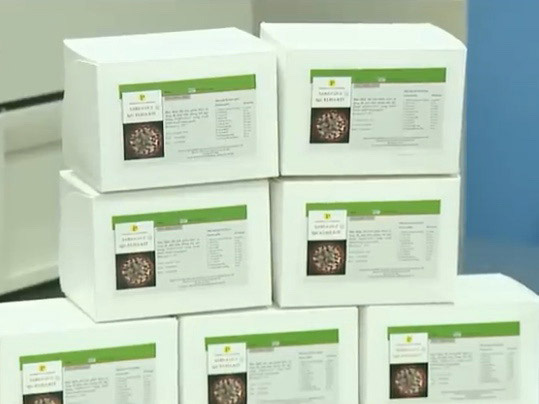 Vietnamese researchers in collaboration with their peers from Japan have successfully developed a fast-result test kit for the novel coronavirus that causes the respiratory disease called COVID-19 with better accuracy than most rapid-result kits available on the market.

The new test kit is the fruit of a collaboration between experts and researchers from Vietnam's National Institute of Hygiene and Epidemiology (NIHE) and Japan’s Nagasaki University since February.

According to NIHE’s head Prof. Dr. Dang Duc Anh, the idea of developing the test kit came right after the institute’s scientists had been successful in isolating the novel coronavirus (SARS-CoV-2).

RT-PCR tests look for the virus’s genetic material in samples collected from patients’ throats or noses, while antibody tests, rather than looking for the virus itself, detect antibodies or proteins in the blood that our bodies develop in order to fight it off.

The RT-PCR tests have been produced by the Vietnam Military Medical University and Viet A Company for nationwide use and export.

The test kit has also been recognized by the World Health Organization for meeting all standards defined by the agency after undergoing five rounds of testing and quality evaluation.

Currently, most available rapid-result tests on the market, while returning results quicker, can only detect accurately about 60-70 percent of samples with SARS-CoV-2 antibodies.

“So what we were looking for was a method that is both faster and more accurate,” Anh told Tuoi Tre (Youth) newspaper.

The researching group from NIHE and Nagasaki University had worked for two months until the fruit of their labor came in April with the introduction of a new test kit.

Utilizing the widely available ELISA systems, the new test kit can achieve sensitivity and specificity of up to 95 percent.

Vietnam’s healthcare system is already equipped with plenty of ELISA machines that were previously purchased to diagnose dengue, HIV/AIDS, and immune diseases.

The new method also results in no cross-reactivity with other viruses as seen in other rapid tests.

“Another advantage of this method is that it allows testing multiple samples at a time,” Anh said.

The NIHE head added that the team also successfully developed the antigen that is crucial in performing this testing method.

The results of the research have been handed over to the Center for Research and Production of Vaccines and Biologicals (Polyvac) in Hanoi for production.

The Polyvac has also registered the product at the Ministry of Health for circulation and use in serological studies in Vietnam.

The Vietnam-Japan team of researchers is the only fifth group in the world to have successfully developed rapid-result SARS-CoV-2 test kits utilizing such a method.

The novel coronavirus, which first emerged in the central Chinese city of Wuhan in December 2019, has infected over 3.4 million people and killed more than 239,600 globally, according to statistics. More than 1.08 million have recovered.

Vietnam has confirmed 270 patients, of whom 217 have recovered as of Saturday afternoon.

No death from the disease has been recorded in the country.