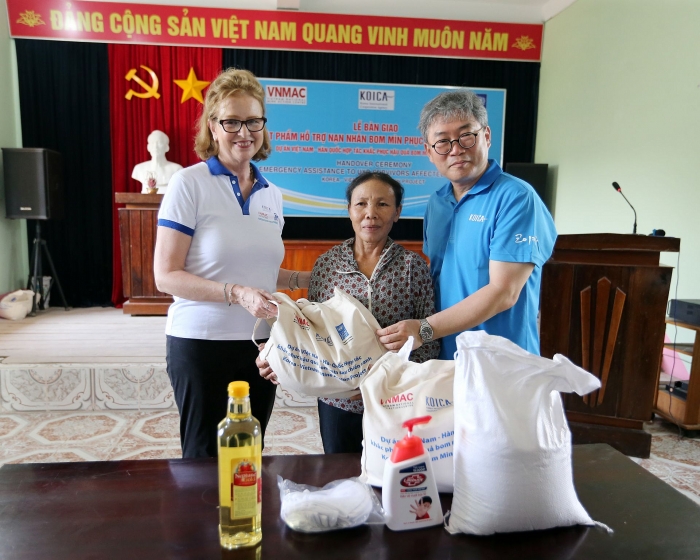 Aid packages of basic commodities were handed over to help thousands of unexploded ordnance (UXO) survivors in two Vietnamese provinces on Tuesday under a joint international effort led by the United Nations Development Program (UNDP).

Representatives from UNDP and the Korea International Cooperation Agency (KOICA) delivered food, face masks, and hand sanitizers in a ceremony that took place in the north-central province of Quang Binh, UNDP said in a press release on the same day.

The items will be distributed to more than 9,100 UXO survivors and their families in Quang Binh and the south-central province of Binh Dinh.

UNDP had previously organized a rapid assessment to help identify health and socio-economic challenges faced by people with disabilities and their families during the novel coronavirus disease (COVID-19) pandemic.

The assessment was supported by the Australian Department of Foreign Affairs and Trade (DFAT), the Embassy of Ireland in Vietnam, and KOICA.

Many of the UXO survivors in Quang Binh and Binh Dinh participated in this assessment and shared their difficulties in accessing necessary medical care, supplies, and basic items such as food and personal protective equipment.

Sixty-six percent of the UXO victims surveyed said they did not have enough money to purchase essentials; 59 percent saw their family income reduced; 35 percent were facing temporary unemployment.

“We wanted to react quickly to meet some of these urgent needs and today’s event is our immediate response to the survey results presented ten days ago,” UNDP resident representative in Vietnam Caitlin Wiesen was quoted as saying in the press release.

“I am therefore delighted to be here this afternoon together with the KOICA country director to present packages of food, face masks, and hand sanitizers for distribution to more than 9,100 UXO survivors and their families in Quang Binh and Binh Dinh Provinces in response to COVID-19.’’

“The essentials which the Korea-Vietnam Mine Action project presented to UXO survivors today reflect the friendship and solidarity of Korean people to Vietnamese people,” he was quoted as saying.

Assistance to UXO victims and their families is an important component of the Korea-Vietnam Mine Action project, which was jointly launched in early 2018 by the Vietnam National Mine Action Centre (VNMAC), KOICA, and UNDP to accelerate mine action for safety and sustainable development.

In collaboration with the Ministry of Labor, War Invalids, and Social Affairs, the project has developed an official database on 75,000 people with disabilities, 9,100 of whom are UXO survivors.

The database includes need assessments of UXO survivors, thus enabling the project to provide them with relevant and targeted support.

The Korea-Vietnam Mine Action project also helps strengthen the governance and management of national mine action activities and reduce future accidents through increasing the awareness in local communities about the potential risk from explosive remnants of war.

The project has so far surveyed nearly 17,000 hectares of land and cleared over 4,000 hectares of contaminated areas in Quang Binh and Binh Dinh, providing more land for development in these provinces.

Meanwhile, more than 150,000 local students and people have been educated by the program on how to remain safe in mine-affected environments.

The Americans used over 15 million metric tons of explosives during their war in Vietnam, around five percent of which remains unexploded to date, according to VNMAC.

Around 18.71 percent, or 6.1 million hectares, of Vietnam’s land area is contaminated with explosives, with more than 40,000 people having been killed in incidents related to UXO since 1975, it said.