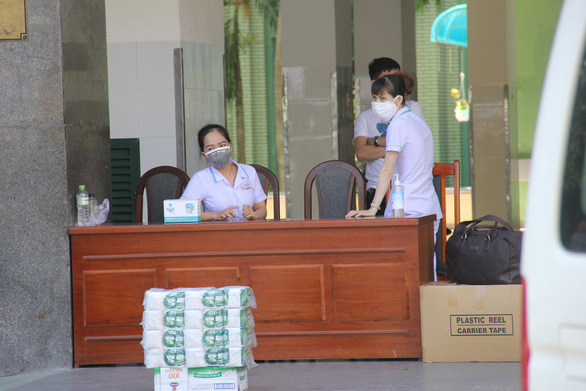 Vietnam’s coronavirus patient No. 420, the country’s latest who comes from central Da Nang City, had visited an apartment in Ho Chi Minh City before showing signs of a fever, the Ministry of Health said late on Sunday night.

Earlier the same day, the ministry had confirmed the patient, a 71-year-old woman, as a locally-transmitted case.

Her travel history has been revealed at a time when local authorities are conducting extensive contact tracing to stem the virus.

She visited her adult child at an apartment building in District 11, Ho Chi Minh City from June 21 to July 8.

The woman returned to Da Nang on July 8. She lives with her husband, son, and daughter-in-law.

The patient has another daughter in Da Nang but she has not met her since coming back to Da Nang from Ho Chi Minh City.

She and her husband went shopping at a wholesale market in Da Nang a few days before she showed symptoms of a fever.

On July 12, she ran a fever and suffered chest pain. At this time, she visited her younger sister on 2-9 Street in Hoa Cuong Nam Ward, Hai Chau District, Da Nang.

Her husband bought medicine for her at the C.T. drugstore on Hoang Dieu Street, Da Nang on July 16.

The woman came to Da Nang C Hospital for a medical examination after having been on medication for five days without feeling any better. She got back home following the check.

Three relatives then visited her from neighboring Quang Nam Province.

She was admitted to Da Nang C Hospital on July 22 and has tested positive for COVID-19 ever since.

The patient is among three cases having been detected in the community in Da Nang in the past two days, with their sources of infection still unknown.

Vietnam has documented four locally-transmitted infections since Saturday, two of them in a critical condition with life support in Da Nang, after more than three months of no community-based transmission. The other case is being treated in central Quang Ngai Province.

The country has documented 420 coronavirus patients as of Sunday night, with 276 imported cases quarantined on arrival.

A total of 365 patients have recovered from the disease while zero deaths have been recorded so far.