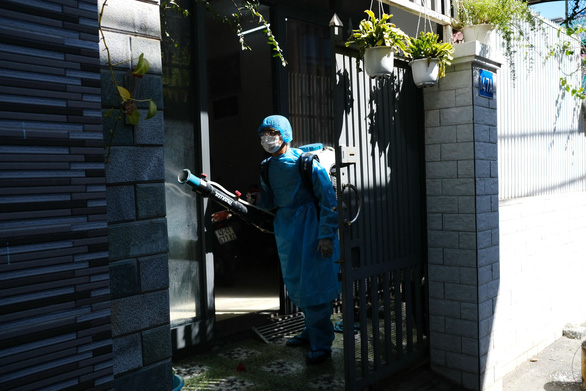 The two patients were detected in Da Nang City and Quang Ngai Province, both located in the central part of the country, and their sources of infection are unclear, the health ministry said in an update.

The ministry had registered one local infection, patient No. 418 in Da Nang, on Sunday morning. Patient No. 419 is a 17-year-old man living in Quang Phu Ward, Quang Ngai City, which is the capital of the namesake province.

He went to take care of a relative at Da Nang Orthopedics and Rehabilitation Hospital on July 14 and returned to Quang Ngai on a long-haul bus three days later. Some of the passengers had visited Da Nang C Hospital.

On July 20, the patient showed signs of a fever when he visited the hospital again from Quang Ngai.

Two days later, he traveled back to his hometown by train and developed symptoms of a fever, slight coughing, and difficulty breathing. He then came to Quang Ngai City General Hospital for a medical check-up.

The Quang Ngai Center for Disease Control took a sample from him for a COVID-19 test at the Pasteur Institute in the south-central city of Nha Trang on Friday.

The result returned positive on Sunday. He is being isolated for treatment at a grassroots-level medical center in Quang Ngai.

On July 12, she exhibited symptoms of a fever and chest pain. She was admitted to Da Nang C Hospital on July 22.

She was tested for the new coronavirus on Saturday and the result came back positive on Sunday.

The woman is being treated at Da Nang C Hospital.

Vietnam has documented 420 coronavirus infections as of Sunday night, with 276 imported cases quarantined on arrival.

A total of 365 patients have recovered from the disease while zero deaths have been recorded so far.

At the time of writing, Vietnam is quarantining 11,187 people who had close contact with confirmed patients or entered the country from virus-hit regions.

The Southeast Asian country has reported four locally-transmitted cases since Saturday, two of them in a critical condition with life support in Da Nang, after more than three months of no community-based transmission.

The Da Nang administration has banned crowded events as well as closed non-essential services to stall the virus.

Authorities are conducting aggressive contact tracing to prevent the virus from spreading further.

Vietnam still closes borders to foreigners but foreign experts and skilled workers are allowed in, subject to government approval and compulsory quarantine on arrival.

The government has sent aircraft to other nations to repatriate Vietnamese citizens, also quanrantined upon landing.

Officials in Da Nang and its neighbor Quang Nam Province have detected dozens of Chinese illegally entering Vietnam and staying in local lodging facilities this month.