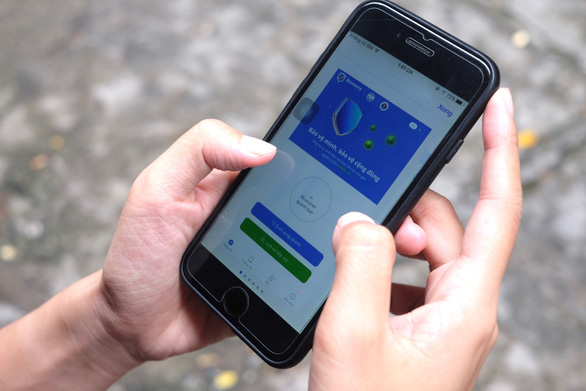 Vietnam is urging its citizens to install a domestically developed contact-tracing mobile app to identify and alert people who have interacted with COVID-19 patients.

The smartphone app, named Bluezone, relies on Bluetooth signal to log when two users are near each another, information that can later be used for contact tracing in relation to COVID-19 cases.

The development of the Bluezone app is overseen by Vietnam’s Ministry of Information and Communications and Ministry of Health. It was introduced on April 18.

Minister of Information and Communications Nguyen Manh Hung pledges that the tracking app would not invade users’ privacy.

Only over 4.2 million people out of Vietnam’s 76.8 million smartphone users have downloaded the app, according to the Ministry of Information and Communications.

Vietnam had a population of more than 96.2 million as of April 2019, according to the General Statistics Office.

The figure is far behind the ministry’s target of 50 million active Bluezone users – the minimum number that it believes is needed for the app to have a meaningful impact.

In order to realize this target, Minister Hung ordered all state-owned agencies and enterprises to request all visiting guests to install the app.

Meanwhile, the Vietnam Telecommunications Authority (VNTA) under the ministry asked mobile service providers to send text messages to all subscribers on a daily basis, reminding them of installing Bluezone.

In addition, the VNTA is propagandizing the app by running the message “Hay cai dat Bluezone” (Please install Bluezone) next to carrier logos on smartphones.

At the same time, the Authority of Information Technology Application said it is altering some information on the application to prevent misunderstandings, as well as setting up a hotline for troubleshooting.

Previously, the People’s Committee of Da Nang City in central Vietnam, where 193 local COVID-19 infections and seven deaths have been recorded since July 25, also encouraged local residents to install the contact tracing app on their smartphones.

Vietnam has documented 718 COVID-19 cases, with 381 recoveries and ten virus-related deaths since the coronavirus first hit in January.

The detection of a community-based patient in Da Nang on July 25 ended the country’s streak of 99 days with no local transmission.