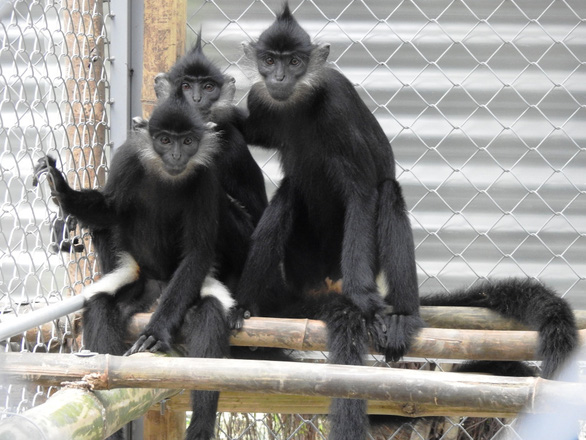 Three critically endangered Delacour's langurs were released into the wild in the northern Vietnamese province of Ninh Binh on Thursday.

The three langurs are a family that were born in captivity at the endangered primate rescue center of Cuc Phuong National Park.

The father langur’s name is Huynh, the mother’s name is Emily, and their baby is Bonny.

Before their release, they were sampled for tests for hepatitis A, hepatitis B, tuberculosis, and some other diseases as per international standards.

The Delacour’s langurs were also brought to semi-wild areas to be trained in order to develop their natural behaviors.

Their growth and development during the training process were monitored thanks to electronic chips implanted in their bodies.

The Delacour’s langur is classified as critically endangered by the International Union for Conservation of Nature.

The Trang An Scenic Landscape Complex used to host Delacour’s langurs during the 1990s, though their numbers were wiped out by poaching.

Releasing the langurs back into the naural habitat would not only create an attractive highlight for visitors to the site, but also raise public awareness of conservation.