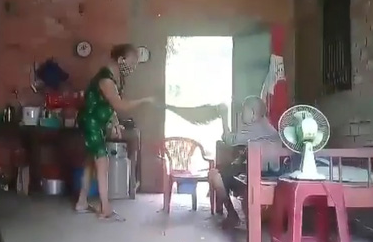 Police in the Mekong Delta province of Long An on Tuesday afternoon arrested and launched legal proceedings against a woman after a video showing her beating her elderly mother went viral on social media.

The woman was identified as Nguyen Thi Hoa, 56, who is a native of Long Hoa Commune, Can Duoc District, Long An.

The seven-minute video which circulated on the Internet showed Hoa brutally assaulting her elderly mother with her hands, a broom, rocks, and trash.

She was also heard scolding and threatening the mother with offensive words.

The abused mother passed away at the age of 79 on September 2.

Footage of the disturbing incident, which was recorded in August by Hoa’s children, went viral after a relative visiting their grandmother’s funeral uploaded it to social media.

Upon receiving the information about the video, Huynh Van Quang Hung, chairman of the People’s Committee of Can Duoc District, asked local authorities to immediately work on the case.

During a working session with local police, Hoa admitted her brutal acts were caused by her anger accumulated after years of taking care of the elderly mother alone while receiving “no inheritance [from her].”