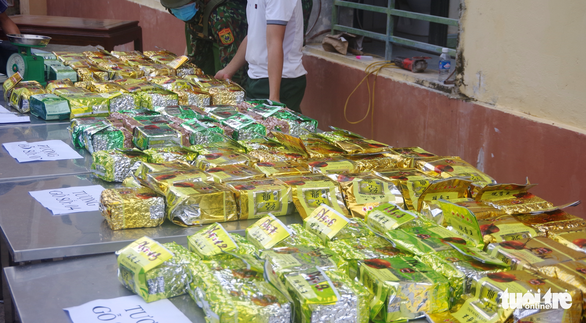 Vietnam, Laos cooperate in arresting 10 for transporting over 230kg of drugs across border

Vietnamese and Lao authorities have captured 10 people for trafficking over 230kg of drugs in wooden statues across the border.

Border defense forces in the north-central Vietnamese province of Ha Tinh provided the figures on Monday.

Authorities in Ha Tinh, which borders Laos, intercepted the transport of almost 100kg of synthetic drugs stashed in five wooden statues equipped with positioning systems at 7:00 pm on September 8.

A Laotian had hired people to deliver the drugs from Vientiane to a person in Ho Chi Minh City.

Ha Tinh officials figured out that this was part of a drug trafficking racket so they expanded their investigation.

At noon on September 10, authorities in Ha Tinh and Ho Chi Minh City arrested more suspects of this ring simultaneously.

They seized 19 cakes of heroin weighing over 132kg, all hidden in wooden statues.

A total of 10 suspects were captured in both interceptions, with help from the Lao side.

Those convicted of possessing or smuggling more than 600 grams of heroin or more than 2.5 kilograms of methamphetamine could face capital punishment.