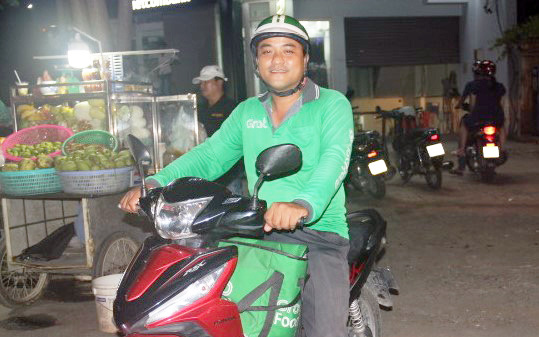 Ride-hailing app driver in Saigon to start college at 35

Vo Duc Tam works as a driver in Ho Chi Minh City for ride-hailing app Grab, but he will start attending college in a few days, in the hope of changing his life for the better.

Never too late to start

Early in the morning, Tam returns to his tiny dorm room in Binh Chanh District of Ho Chi Minh City, which costs him and his roommate, who is also a driver for Grab, just over VND1.3 million (US$56) per month.

This room has been his home since he came to Ho Chi Minh City three years ago to work as a driver.

Born into a large family in the Mekong Delta province Vinh Long, Tam lived his childhood in a roughly-built shack.

He dabbled in a multitude of jobs right after graduation from high school, working as a property guard, parking lot guard, shopkeeper and delivery worker, none of which was enough to make ends meet.

It was out of the need to cover the bills for both him and his sister that Tam decided to move to Ho Chi Minh City, hoping to earn more with gig-based work.

The job was lucrative when he first arrived, but it suddenly became less profitable due to the COVID-19 social distancing restrictions that were in place back in April.

“In the quarantine days, the street was cleared of people [so] no one was booking rides. Businesses were also closed, and no one was ordering food either. Life was stressful at that time. I had no money but I still have to survive,” Tam recollected.

The restrictions brought a new perspective to Tam, and he began to think about what he should do next to make sure that he can take care of himself and his sister.

After a round of sleepless nights and a few conversations with college students, he figured out what the next breakthrough in his life might be.

“I was committed to pursuing further education, to enter the lecture hall to learn a trade academically. With a trade, my life would change and opportunities would open up. Thirty-five is not too late, but it would be if I have not started tomorrow,” Tam reasoned.

A few months after, he was accepted into Cao Thang Technical College.

When he came to the school to submit paperwork, Tam was requested to pay upfront a total of VND6 million ($258) in tuition fees and other extras. At that time, he only had VND4 million ($172) to his name.

“I had started to squeeze my budget on food and other expenditures to save money for my studies ever since I began to consider attending college,” Tam said.

“Then the pandemic happened and there was barely any income, much less [any spare amount for] savings. As I didn’t have enough [to cover the tuition fee], I had to borrow from my friends to gather VND6 million,” Tam recounted as he pulled out the tuition fee receipt and college acceptance letter as proof of his first success on his new path.

Fellow Grab drivers are skeptical about Tam’s choice at first, pointing out his age as a setback on any academic pursuit.

Yet, Tam has his mind set on the goal, even as he knows that the path he chose is not easy.

Running gigs from the morning till 8:00 pm, Tam revealed that he had collected VND200,000 ($8.6) in fare — fuel costs and commissions toward Grab excluded.

That amount might sharply diminish during the semester: Tam’s curriculum at Cao Thang will span three years and require full-time commitment with theoretical lessons in the morning and hands-on practice in the afternoon, which leaves only the nighttime open for him to drive.

That is not to mention homework and studying that might stretch into the night as well.

Understanding the challenge, Tam made it clear that he cannot back down, and he is ready to exert himself to the fullest for a brighter future.

As for his choice of major, Tam reasoned that almost all households possess thermo-electrical devices such as refrigerators or air conditioners, which assures the demand for the trade in the future.

As Tam envisaged, he will graduate at 38. By that time, he would have been out of the target demographic for recruitment of most enterprises, so working in a local store would be the most sensible choice for him.

Tam has also planned to ask for work at one of his nephew’s repair shops to train repairing thermo-electricity devices.

“My dream is to open a thermo-electricity repair shop, so I would have the choice to move back to my hometown and take care of my sister if I want to,” Tam said.

“As long as I have a trade, my life will change for the better.”