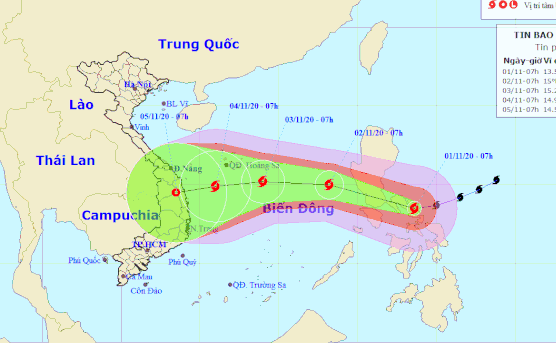 Typhoon Goni, the world’s strongest storm so far this year, has slightly weakened after making landfall in the Philippines and is now on its way to the East Vietnam Sea, threatening central provinces.

Goni was packing winds at 200-220km per hour prior to its landfall in the Philippines early on Sunday morning and was categorized as a super typhoon, according to the National Center for Hydro-meteorological Forecasting.

As of 7:00 am on the same day, it was located in the central Philippines and was downgraded to the typhoon category, as wind speed decreased to between 165 and 185km an hour.

The storm will travel northwest and enter the East Vietnam Sea in the next 24 hours.

By 7:00 am on Monday, Goni will have been located at 660 kilometers southeast of Vietnam's Hoang Sa (Paracel) archipelago, unleashing winds at 90-115km per hour and gusts at up to 150km an hour.

The typhoon will head west in the next 24 to 48 hours, with wind speed dropping to 75-100km per hour on Tuesday morning.

By Wednesday morning, the storm will have been at 220 kilometers east of the coastline from central Da Nang City to south-central Phu Yen Province, with winds at 90-100km an hour.

Typhoon Goni is the world’s strongest storm so far this year, Reuters reported, adding that Philippine authorities had evacuated nearly a million people to safer ground before it approached the eastern provinces and made landfall in Catanduanes and Albay in the Bicol region.

Vietnam’s National Steering Committee for Natural Disaster Prevention and Control on Saturday called on relevant agencies to promptly assist residents affected by Storm Molave and carry out necessary measures to prepare for the upcoming arrival of Typhoon Goni.

As of Friday, Molave, the ninth storm to hit Vietnam this year, had killed 23 people, left 47 others missing, and damaged and submerged thousands of houses in central Vietnam.