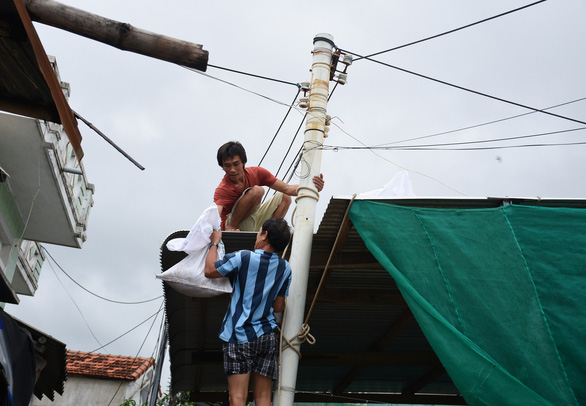 Authorities of the south-central province of Phu Yen have evacuated 4,000 residents from their floating aquaculture facilities and another 2,070 from vulnerable areas to safe spots, while those in neighboring Khanh Hoa Province have also moved over 2,000 residents in the provincial capital of Nha Trang to safety.

Lam Duy Dung, vice-chairman of the Song Cau People's Committee, said all vessels from local aquaculture areas have been docked in preparation for the coming storm.

Over 3,000 fishermen from Xuan Dai Bay and Cu Mong Lagoon have also been evacuated to the mainland.

“We also planned to evacuate over 4,000 residents from low-lying areas to public office buildings, culture houses, and schools to take shelter,” Dung said.

In My Quang Nam Village of An Chan Commune, an area prone to tidal flooding, families can be seen stacking up sandbags to prevent floodwater from entering their houses.

They are also placing sandbags on the roofs to prevent them from being blown away by storm gusts.

Nguyen Van Vu, a resident of My Quang Nam Village, said his family of four will take refuge at a relative’s place, which they have deemed safer, for the night.

At the same time, Vu’s neighbor Nguyen Van Duong and his mother are packing their bags, ready to evacuate promptly when warned by authorities.

Bui Van Thanh, chairman of Tuy An District, reported more than 50 households as vulnerable to storms.

Authorities have asked residents to consolidate their houses before evacuating to safety.

Local authorities have devised plans to evacuate residents in other high-risk areas in case of prolonged rain, he added.

According to the Phu Yen Steering Committee for Natural Disaster Prevention, Control, Search and Rescue, the province has evacuated 4,031 out of 4,101 workers from aquaculture farms to the coast.

Meanwhile, a total of 5,100 vulnerable households and around 2,000 families with more than 5,700 people were already evacuated to safety.

The province is closely monitoring the situation to continue evacuating residents from affected areas.

Earlier on Monday, the Phu Yen administration sent a written notice to urge coastal regions, namely Dong Cau, Tuy An, Dong Hoa, and Tuy Hoa City, to bring all residents from offshore aquaculture facilities to the coast before 6:00 pm.

In Nha Trang, 86 spots were deemed prone to landslides and flash floods, which prompted the evacuation of 2,447 dwellers from 684 households.

Nguyen Duc Trong, chairman of Vinh Nguyen Ward in Nha Trang, said 140 households with more than 500 people had been relocated.