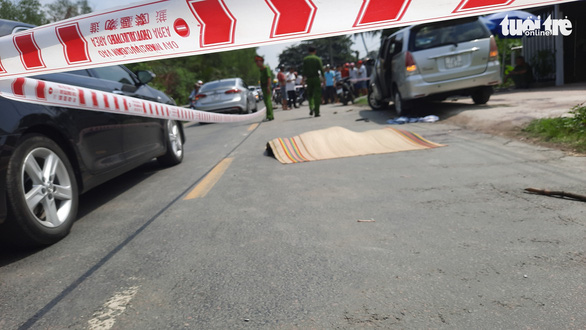 Man arrested for killing kidnapper to rescue wife in Vietnam

Criminal investigators of the Mekong Delta province of Vinh Long on Monday arrested Tran Ngoai Giao, 30, who lives in Long An Commune, Long Ho District, for killing one person who was involved in the attempted kidnap of his wife.

Apart from Giao, the provincial police also apprehended some suspects who were complicit in the botched kidnapping of Giao’s wife.

The suspects will be investigated for taking a person away illegally.

According to preliminary investigation, a seven-seater car suddenly stopped by Nam Giao Coffee House beside National Highway No. 53 on Sunday.

A gang of suspects got out of the car, rushing into the coffee shop to catch the owner Vo Thi Thuy Hang, 29, and intending to drive her away.

Giao was harvesting coconuts in the garden behind the café when he heard his wife’s scream for help.

He rushed out to rescue his wife.

He grabbed an iron stick with a spike head to confront the gang who sprayed him with tear gas.

In the resulting struggle, N.M.T., 30, who lived in the southern province of Ba Ria - Vung Tau, died at the scene and another suspect was severely injured.

Giao turned himself in to police officers right after the incident.