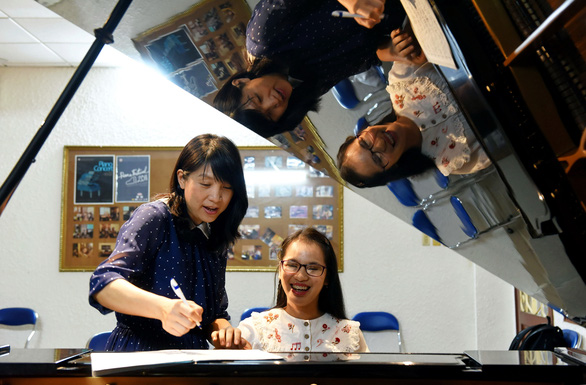 At the age of 17, Do Nguyen Anh Thu has made history as the first-ever visually impaired student to earn direct admission to the piano program at the Ho Chi Minh City Conservatory of Music.

The feat proved that Thu’s lack of sight in no way overshadows her talent and robust passion for music.

To pursue her love of the piano, Thu depended on help from both her mother and her piano tutor.

Thu’s musical prowess was first recognized in 2017 when she won the runner-up prize at a piano competition in Ho Chi Minh City.

This first success only motivated her to work harder.

Seeing that a few 60-minute lessons per week was not enough, Thu and her family decided to move near the house of her tutor, Thuy Yen, so that she could receive more guidance.

Thu and her tutor spent hour after hour in rigid piano lessons, practicing between moments of joy and laughter.

“It’s not easy for a normal person to pursue music, let alone a person with visual impairment," Yen shared.

"Yet, Thu exhibits a passion for the piano.

"She consistently finds way to overcome her disability, while keeping a high morale and giving her best to the art.”

Thu seems to share equal admiration for her teacher.

“Ms. Thuy Yen is a laid-back kind of person. I can share all my emotions when I talk to her. She’s like my second mother who looks after me so I can focus on my studies.”

Thu came from the Mekong Delta province of Kien Giang.

As there are no schools for children with visual impairment available in the locale, Thu’s mother decided to quit her job in telecommunications and move the family to Ho Chi Minh City, where her daughter can access education that meets her needs.

Thanks to the trust and unconditional support from people around her, Thu is taking firm steps toward her goal of becoming a music teacher.