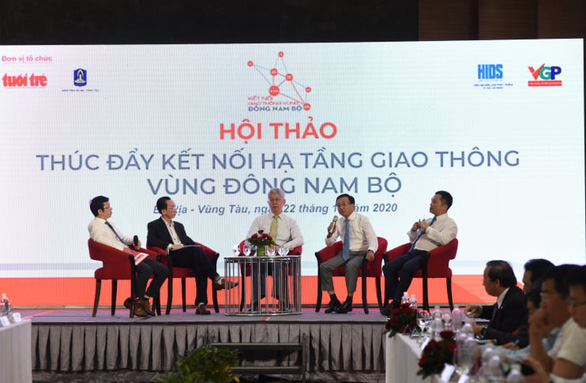 Forming a leading economic hub of Vietnam, localities in the southeastern region should develop synchronized and sustainable infrastructure connectivity to fully exploit their resources and benefit from common growth, according to experts at a conference earlier this month.

The event originates from an idea put forward by Tuoi Tre, whose staff proactively reached out to other entities and formed an organizing board.

Given the current status of development in Vietnam’s southeastern region, there exists a need for a 'conductor' who sets priorities for investment projects and mediates the benefits between provinces in the region, ensuring mutual prosperity and development for the provinces participating in the linkage.

According to Tran Hoang Ngan, director of HIDS, it is essential that an appropriate mechanism with a strong presence of such 'conductor' be in place to understand the strength of each southeastern province and the southeast Vietnamese region as a whole.

Furthermore, the mechanism should allow each province to not only contribute development resources to the linkage but also benefit from common growth.

“The goal is that other provinces, for example Binh Duong and Dong Nai, can share the joy from the development and high state budget revenue of another province, namely Ba Ria – Vung Tau,” Ngan remarked.

Tran Dinh Thien, a member of the Vietnamese prime minister’s economic advisory group, insisted on a new and bold approach to regional connectivity as the issue has been discussed for many years without significant progress in sight.

According to Thien, the southeastern region, the biggest contributor to the state budget, should be entitled to special mechanisms that help boost the economy instead of waiting for the ask-and-give procedures.

“There need to be mechanisms to ensure security and risk management for the pioneers and stakeholders as well as mediating benefits between the public and private sectors investing in regional projects,’ Thien emphasized.

Speaking at the conference, Pham Viet Thanh, secretary of the Ba Ria – Vung Tau Party Committee, pointed at the fact that the southeastern region is the leading contributor to the public sector, contributing 45 percent of the national GDP and about 60 percent of the state budget.

“The region has seen vigorous economic development. It is also one of the few regions that pool all requisites and strengths to lead the industrialization and modernization movement,” Thanh said.

“The southeastern region is ranked as one of the 20 best places for deep-water port development in the world. By 2025, once Long Thanh International Airport is officially inaugurated, a multi-channel connection will be formulated, creating a space to nurture new opportunities and motivations for economic development,” he added.

The Ba Ria – Vung Tau leader also pointed out that the region is dealing with an infrastructure system that is overloaded, congested, and in dire need of proper investment as well as synchronized, sustainable connectivity.

“This is the immediate cause that hindered the economic development momentum in the area,” Thanh said.

With that in mind, the conference served as an important window for representatives to discuss large-scale transport infrastructure projects with an inter-regional vision.

Within the framework of the event, attendants could identify the advantages, drawbacks, and practical issues that they were facing before suggesting solutions for the government and administering agencies.

Prior to this event, Tuoi Tre held an open forum of the same theme, entitled 'Connecting Infrastructure in the Southeastern Region.”

According to Le The Chu, the newspaper's editor-in-chief, the news agency sees this issue from the solution-focused journalistic standpoint.

The issue, though not a new one, is inextricably linked to the overall development of the region, posing direct impact on the lives of the locals.

He called on local residents and pundits, as well as administrative agencies to put forward solutions regarding the topic.

The forum has gathered the interest of experts in economics and transport, as well as a vast number of Tuoi Tre readers, Chu added.

Phuoc suggested the founding of an inter-regional investment fund, which enlists leaders from each province and city in the area as members of its administrative council.

This council will have the authority to approve important projects regarding the promotion of inter-regional connectivity.

Phuoc also proposed the adoption of private-public partnerships to fund the infrastructure items, as the public budget alone is not enough to carry out all these projects.

He also warned of the unresolved issues involved in this model of partnership.

As of 2020, there are 11 expressways with the combined length of 970 kilometers in Vietnam’s southeastern region, a representative from the Ministry of Transport pointed out.

However, only 120 kilometers of these roads was brought into use, which shows a need for further commitment in infrastructural development from central-level as well as local authorities.

Nguyen Duc Kien, another member from the economic advisory group, stressed the lack of consistent orientation in the implementation of approved master plans, as well as the absence of coordination and administration mechanisms within the region.

Hence, “the provinces should cooperate to figure out who and what is needed to solve the problems,” Kien suggested.

In 2012, the prime minister approved the master plan for Vietnam’s southeastern region with a vision for 2020, Tan pointed out.

After a span of eight years, no conclusive report has been presented.

For that reason, the meeting served as a forum to reflect on the implementation of the master plan.

The occasion would also be used to collect opinions and suggestions on the issue for the central government’s consideration, Tan said.