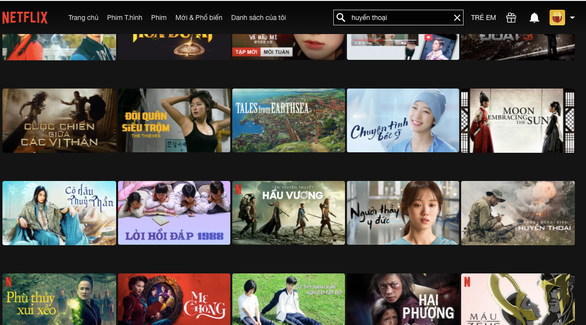 The Vietnam Cinema Department under Vietnam's Ministry of Culture, Sports, and Tourism has launched a probe into the unapproved distribution of state-funded feature films 'Vu Dieu Tu Than' (The Dance of Death) and 'Nhung Nguoi Viet Huyen Thoai' (The Legend Makers) on Netflix.

According to director Bui Tuan Dung, who is the auteur of the two movies, the intellectual property (IP) holder who sold the distribution rights of the two movies to Netflix has not been revealed.

Aware of the issue, Vi Kien Thanh, head of the Vietnam Cinema Department, said the department has requested that the Ministry of Culture, Sports, and Tourism launch an investigation into Netflix’s distribution rights of the two movies.

'Vu Dieu Tu Than' and 'Nhung Nguoi Viet Huyen Thoai' were both funded by the Vietnamese government.

“The right to distribute these movies belongs to the Ministry of Culture, Sports, and Tourism, and the ministry’s approval is required before the movies can be used by domestic and foreign distributors,” Thanh argued.

Addressing the plausible circumstances in which the movie leaked, Thanh pointed to three possibilities.

One is that the Vietnam Feature Film Studio, the production studio of the movies, could have provided Netflix with the source material.

Alternatively, provincial-level Departments of Culture, Sports and Tourism also had copies of the source files and may have released them to Netflix.

The representative of the Vietnam Cinema Department also speculated on more possible sources of the leak, but has yet to come up with a concrete statement.

However, these films were all produced in the private sector, with copyright and licensing terms cleared before the distribution date.

“The filmmakers and agency are all happy that our movies are distributed online. However, the incomes from our intellectual property should be paid to the agency so that the contributors can actually benefit from them,” director Dung noted in an update on his social media account.