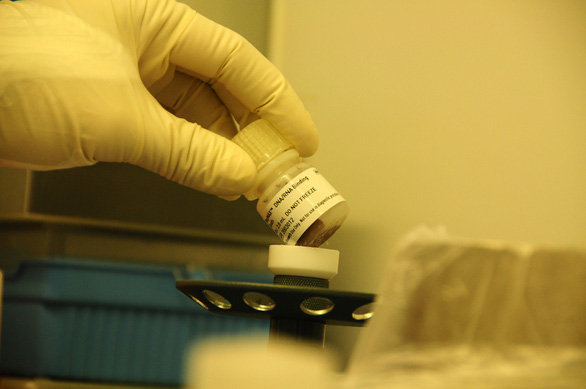 A Russian woman and her daughter have retested positive for the novel coronavirus in the southern Vietnamese province of Ba Ria-Vung Tau after they were given an all-clear and completed quarantine in south-central Khanh Hoa Province.

The 31-year-old woman and her one-year-old daughter were sampled at the Vietsovpetro Medical Center in Vung Tau City, Ba Ria-Vung Tau Province on January 9, the center said on Monday.

The samples were sent to Thong Nhat Hospital in Ho Chi Minh City, and the results came back positive for the novel coronavirus on January 10.

The Vietsovpetro Medical Center promptly coordinated with the provincial center for disease control to bring the woman and her daughter to a local quarantine facility, as well as disinfecting all locations where they had been.

The husband and two health workers at the Vietsovpetro Medical Center were quarantined after coming into close contact with the two cases.

Local authorities are also monitoring the health conditions of 21 people who had indirect contact with them.

All of the direct and indirect contacts have been tested for COVID-19.

According to the report of the Ba Ria-Vung Tau Center for Disease Control, the Russian woman and her child previously came to Vietnam to be reunited with her husband, who is working for Vietnam-Russia oil and gas joint venture Vietsovpetro in Vung Tau City.

After their flight landed in Khanh Hoa Province on November 24, 2020, they were taken to a hotel for quarantine.

The two tested positive for the novel coronavirus on November 26 and were later confirmed as Vietnam’s COVID-19 patients 1,333 and 1,334.

They were treated at the medical center in Cam Lam District, Khanh Hoa and made a full recovery on December 25.

The foreigners were quarantined at another hotel until January 7 and had tested negative for the novel coronavirus twice.

The husband arrived in Khanh Hoa on January 7, before the three family members boarded flight VN6203 from Khanh Hoa to Ho Chi Minh City on January 8.

They got on a passenger bus and arrived in Vung Tau at 10:30 pm the same day.