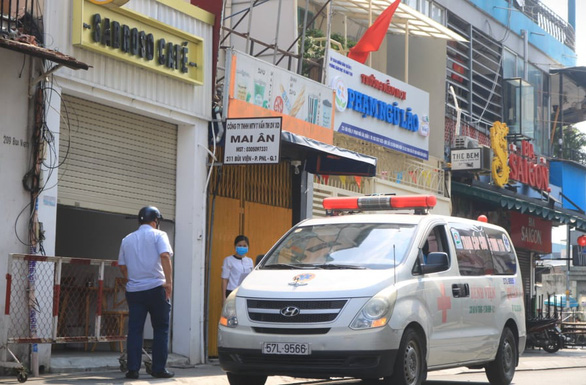 A COVID-19 patient from Hanoi visited many places, including two coffee shops and a massage parlor, in Ho Chi Minh City before he tested positive for the coronavirus on Tuesday, according to an epidemiological investigation.

The patient has been identified as 45-year-old N.A.S., who works as a notary in the capital city.

His test result was confirmed by the Ministry of Health on Wednesday. He was then coded ‘patient No. 1,883.’

S. had come into close contact with an infected patient at Notary Office No. 3 at 6 Duy Tan Street, Dich Vong Hau Ward, Cau Giay District, Hanoi on January 27, according to the health ministry’s epidemiological investigation.

At least twenty-two people who had been confirmed as his direct contacts at Notary Office No. 3 have tested negative once.

He arrived in Ho Chi Minh City at 9:00 am and caught a taxi to a coffee shop on Bui Vien Street in District 1.

The coffee shop is 50 meters from Sabroso Café, located at 211 Bui Vien.

He sat on the sidewalk at the coffee shop for 15 minutes. A waiter and a Filipino customer were present at the venue at that time.

Patient No. 1,883 then walked to Sabroso Café to meet his friend D. and the latter’s wife and kid for an hour.

Two servers got into contact with S., one of whom lives in Nha Be District, Ho Chi Minh City while the other dwells in Binh Duong.

D. then went home in the same car.

Both went on to have coffee at 149/12 Banh Van Tran Street Ward 7, Tan Binh District, where they had contact with two staff members.

From 2:00 pm to 3:00 pm, they used services at a massage parlor on Nguyen Chi Thanh Street in District 5, where they came into contact with 10 employees.

T.’s wife, son, and niece were upstairs when S. and L. were present downstairs.

Patient No. 1,883 had also come into contact with multiple people in Hanoi, which has recorded 21 local infections since last week, prior to his diagnosis.

Health authorities have been calling on those flying or coming into contact with the patient to keep in touch with local medical facilities to have their health monitored.

Vietnam has documented 1,948 coronavirus cases, including 1,059 domestic infections, as of Thursday morning, with 1,461 recoveries and 35 deaths, according to the Ministry of Health.

The country has logged 366 local infections since a new COVID-19 wave hit it on January 27.