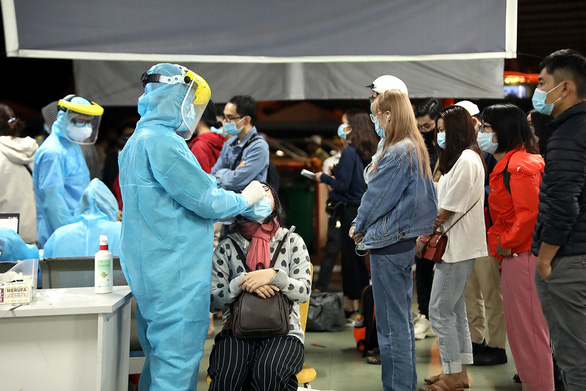 The Ho Chi Minh City Center for Disease Control (HCDC) on Thursday required that all people who have arrived in the city from Hai Duong Province since February 3, Vietnam's current COVID-19 epicenter, be sent to centralized quarantine facilities and tested for the novel coronavirus in order to prevent transmission.

The same mandatory quarantine will be applied to all people who have traveled through Group 1, Quarter 6, Hong Ha Ward, Ha Long City, as well as Thuy An, An Sinh, Binh Duong, and Nguyen Hue Communes in Dong Trieu Town in northern Quang Ninh Province since February 3.

The HCDC will also send all arrivals to Ho Chi Minh City from Yen My and Khoai Chau Districts in northern Hung Yen Province since February 10 to concentrated quarantine facilities.

Ho Chi Minh City authorities ancitipate that people from across the country will return to the city to work and study after the Lunar New Year holiday, raising the risk of COVID-19 spread.

The process is meant to help detect cases of infection as early as possible and avoid community transmission.

The country’s tally stood at 2,347 COVID-19 cases as of Friday morning, with 1,605 recoveries and 35 deaths, according to the Ministry of Health.

A total of 755 local infections have been detected in 13 provinces and cities since January 27.

The majority of domestically-transmitted cases were traced back to Hai Duong and northern Quang Ninh Province, with 575 and 60 patients, respectively.