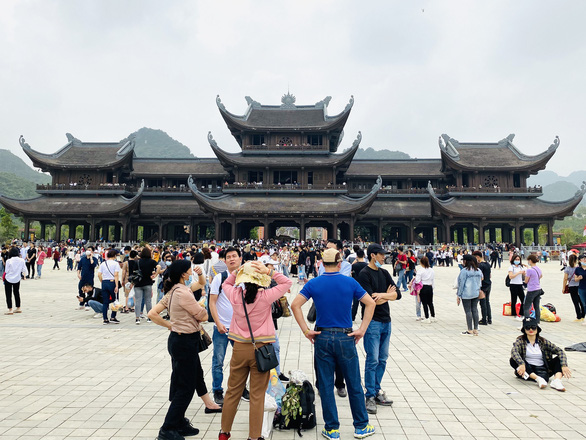 Tam Chuc Pagoda Complex, Vietnam's largest Buddhist compound in northern Ha Nam Province, welcomed 50,000 visitors on the weekend, the largest crowd the pagoda has ever drawn since the novel coronavirus emerged in the country last year.

Most Venerable Thich Minh Quang, Tam Chuc Pagoda’s representative, said that the premises were crowded on Sunday due to the unexpectedly high number of visitors, which caught the pagoda management off guard.

The crowding was eventually eased thanks to the pagoda’s effort to mobilize shuttle buses to send pilgrims to the entrance to the main compound.

According to Quang, around 50,000 visitors reached Tam Chuc Pagoda on that day, the most crowded the place has seen since early 2020, when COVID-19 first hit Vietnam.

Deluges of pilgrims flocking to pagodas to pray for health and good luck is a scene usually seen in Vietnam’s festival season, which commences after the Lunar New Year holiday ends around late January or early February.

However, the majority of traditional festivals and religious ceremonies have been canceled this year, with household names such as Huong Pagoda in Hanoi and Yen Tu Pagoda in Quang Ninh Province imposing entry restrictions to maintain safe distancing.

Meanwhile, Bai Dinh Pagoda, which is considered the biggest pagoda in Vietnam, joins Tam Chuc Pagoda in a list of religious places that remain completely open to visitors.

Thanks to its more relaxing policies, Tam Chuc Pagoda had reported at least a thousand pilgrims on previous weekends, which soared to tens of thousands last weekend.

Most Venerable Quang attributed the visitor upsurge at his premises last week to the fact that Huong Pagoda, about 55km away, lifted its entrance curbs on Saturday, which pulled in around 40,000 visitors to the area.

Thanks to Vietnam's initial success in its combat against the latest COVID-19 outbreak, which emerged on January 27, tourists can now visit many fesitvals and social gatherings in the country.

However, none can be sure whether risks of community transmission have been fully eliminated, as the entry of border jumpers into Vietnam through trails and footpaths could enkindle another outbreak anytime.

Most Venerable Quang expressed concerns over the negligence of many pilgrims, who frequently pulled down their face masks to pose for pictures on the premises, despite the pagoda's constant reminder of mandatory face mask wearing, hand washing, and safe distancing.

“As the pandemic has generally settled, we can’t deny the [visiting] demands of Buddhists,” he said.

“We can only try our best to maintain epidemic prevention guidelines.”

Ta Dinh Quyen, deputy director of the Ha Nam Department of Culture, Sports, and Tourism, said the number of visitors also came as a surprise to local authorities.

His department also called a meeting with the administration of Tam Chuc Tourism Site on Monday to discuss solutions for maintaining safety while welcoming large crowds of tourists.