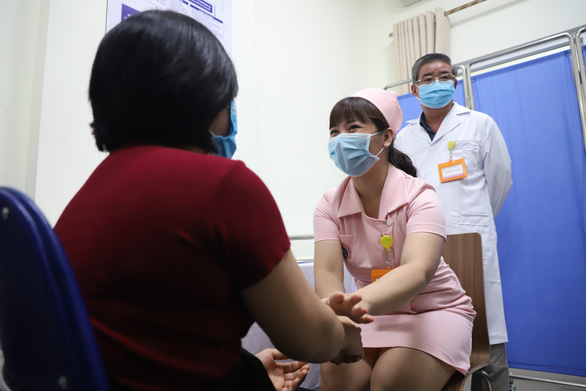 Six among 120 volunteers in the first phase of the human trial of Vietnam’s homegrown COVID-19 vaccine Covivac received their jabs on Monday.

Covivac is developed and produced by the Institute of Vaccines and Medical Biologicals (IVAC), while the trial is being carried out by the National Institute of Hygiene and Epidemiology at Hanoi Medical University.

After receiving the first injections, all six Covivac volunteers exhibited positive results with no abnormalities reported.

According to Dang Duc Anh, director of the Central Institute of Hygiene and Epidemiology, each of the remaining 114 volunteers will receive their shots in sessions that are spaced eight days apart from each other until the phase ends on April 20.

It is calculated that each session will accommodate 12-18 volunteers.

Phase two of the Covivac human trial will commence right after the end of the first phase, with 300 volunteers to receive the doses in northern Thai Binh Province.

All volunteers are enrolled for insurance contracts of US$1.7 million in total value, which will cover vaccine-related complications.

According to Anh, volunteers will also be put under constant health monitoring during the trial period, as well as receiving seven medical screenings within a year from the injection to appraise the jab’s safety and effectiveness.

Covivac, if the trial is successful, will sell for US$2.8 per dose, the national radio Voice of Vietnam (VOV) reported.

So far, all 620 Nanocovax testers remain in good health conditions.

The coronvirus vaccination campaign in Vietnam began on March 8.

About 16,000 people in 12 provinces and cities have received their first shot of the AstraZeneca vaccine since.