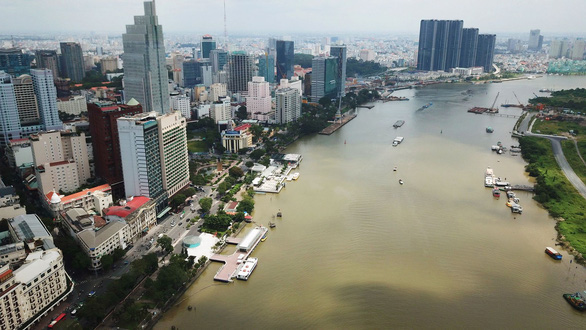 A floating restaurant has been asked to relocate away from Bach Dang Wharf in downtown Ho Chi Minh City as local authorities implement a project on renovating Bach Dang Wharf Park.

Hao Huy Company will have to coordinate with operators of Bach Dang Wharf’s berth No. 4 to relocate the Elisa floating restaurant, according to a request from the municipal People’s Committee.

No compensation will be paid to the company for the relocation.

Elisa has been offering its services at Bach Dang Wharf every Friday-Sunday, as well as during holidays.

However, these restaurants would have to relocate without compensation when local authorities implement a project on renovating Bach Dang Wharf Park.

In late March, vice-chairman of the municipal People’s Committee Le Hoa Binh requested the Department of Construction to expedite the implementation of the project.

Accordingly, the implementation is divided into three phases, with the first expected to be complete before April 30.

The second phase will wrap up before September 2, and the third will be finished prior to December 23.

The renovation of Bach Dang Wharf Park is estimated to cost VND26 billion (US$1.1 million).

Half of berth No. 3 is being utilized by Saigontourist Holding Company to operate its Saigon floating restaurant, while the remaining half is managed by the city’s waterway traffic police unit.