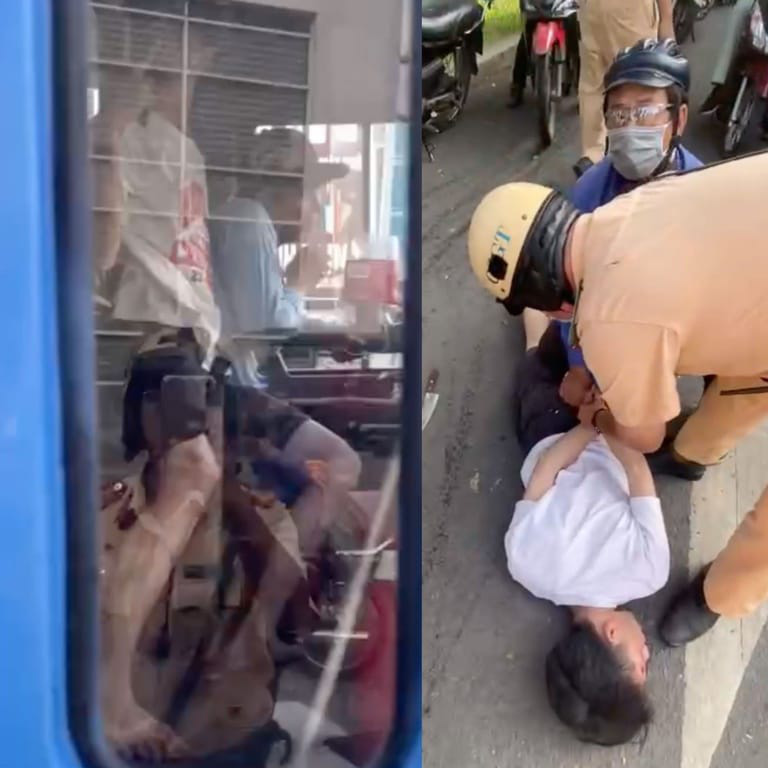 Police in Ho Chi Minh City showed off great teamwork by timely bringing a man under control while he was holding a bus driver at knifepoint under the influence of drugs on a running bus on Saturday morning.

Captain Khuu Hoang Tuan was on duty at the intersection between Xo Viet Nghe Tinh and Phan Van Han Streets in Binh Thanh District at around 7:30 am on the same morning when someone reported to him that a bus driver was being threatened with a knife by his neck by a male passenger on the bus which was traveling on Xo Viet Nghe Tinh Street in the direction from Hang Xanh intersection to Thi Nghe Bridge.

Captain Tuan then informed his colleagues stationing at the other end of Thi Nghe Bridge about the incident via his walkie-talkie and started to chase after the reported bus.

Lieutenant Nguyen Thanh Vinh, Captain Nguyen Hoang Minh, and Captain Nguyen Van Nhut, who were patrolling nearby, saw the bus passing through the intersection between Nguyen Thi Minh Khai and Nguyen Binh Khiem Streets in District 1 when they just received the news.

By the intersection between Nguyen Thi Minh Khai and Dinh Tien Hoang Streets, Lieutenant Vinh accelerated his scout motorcycle to block the way of the bus, pointing at the vehicle’s wheel with a gun.

At that time, the man in question let go of the bus driver, grabbing his bag and the knife and getting off the bus.

The traffic police officers then approached and put him under control.

According to the bus driver, the knife man requested the busman to drive the vehicle to the Mekong Delta region as he wanted to get free from his family.

The investigation into the case is underway.