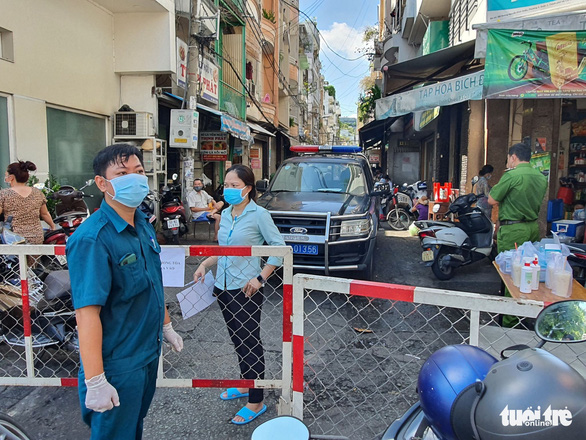 An alley in Ho Chi Minh City started to be isolated on Thursday after a person selling noodle soup there tested positive for COVID-19 on Wednesday.

Police and other forces are locking down the alley at 287 Nguyen Dinh Chieu Street, Ward 5, District 3 over the suspected case, Tuoi Tre (Youth) newspaper journalists reported from the scene.

The district is considered one of the central business hubs of the city.

About 100 households live down the 200-meter-long alley.

The Ho Chi Minh City Hospital for Tropical Diseases is conducting a retest on the suspected case, who sells noodle soup in the alley.

She visited Medic Medical Center, which is very crowded every day, at 254 Hoa Hao Street, District 10 on Wednesday, according to an epidemiological investigation.

“On Wednesday morning, the 58-year-old patient came to have her chest X-rayed over suspected tuberculosis,” said Phan Thanh Hai, director of the medical center.

Authorities have disinfected related locations, collected samples from her contacts for testing, and proceeded with further contact tracing.

They were detected when developing a software program for Grove Group at 129 Pasteur Street, Vo Thi Sau Ward, District 3.

The Ministry of Health confirmed 30 domestic cases of COVID-19 on Thursday morning, taking the national tally to 4,720 patients.

Recoveries have reached 2,687 while 38 patients have died, most having suffered critical pre-existing health problems.

Vietnam is battling a fourth wave that broke out on April 27, after having gone about a month without any known community transmission.

The country has registered 1,678 domestic infections in 29 provinces and cities since that date.

Ho Chi Minh City has recorded only three cases, except for the noodle soup seller, in this round.