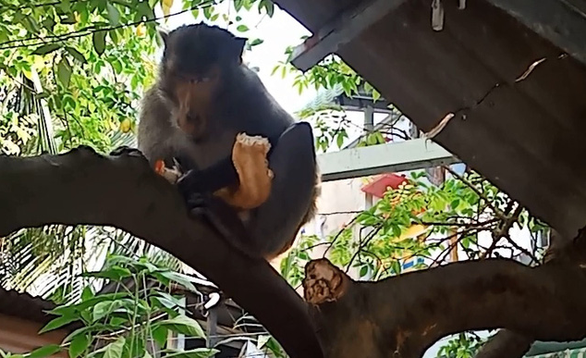 Authorities and local people in District 8, Ho Chi Minh City have been dealing with the unwelcome visits of two allegedly-endangered wild monkeys for the past three months.

According to the local residents, the two monkeys, including a male ape and a smaller one, came down from the trees to steal food while they were having outdoor meals.

The animals even broke into local houses to find anything they could eat, either cooked or raw.

No one knows where the monkey came from as they only noticed their appearance in the residential area near local Lo Than Market about three months ago.

“These monkeys have not bitten anyone so far, but I feel worried for little children at home,” said a local resident.

“I hope the authorities will handle and relocate these monkeys as soon as possible.”

A representative of local authorities told Tuoi Tre (Youth) newspaper on Wednesday that they have sought help from the Forest Protection Department of Ho Chi Minh City to catch the monkeys and handle them according to regulations.

However, the department has been unable to tackle the issue.

“We will continue having the Forest Protection Department of Ho Chi Minh City find the monkeys,” the representative said.

According to a local ranger, the monkeys in question have the same characteristics as those of a long-tailed macaque listed in Appendix II of the Convention on International Trade in Endangered Species of Wild Fauna and Flora (CITES).

The ranger advised that when discovering wildlife trafficking and captive breeding or wandering wild animals, people should not handle it themselves, but immediately report it to local authorities.