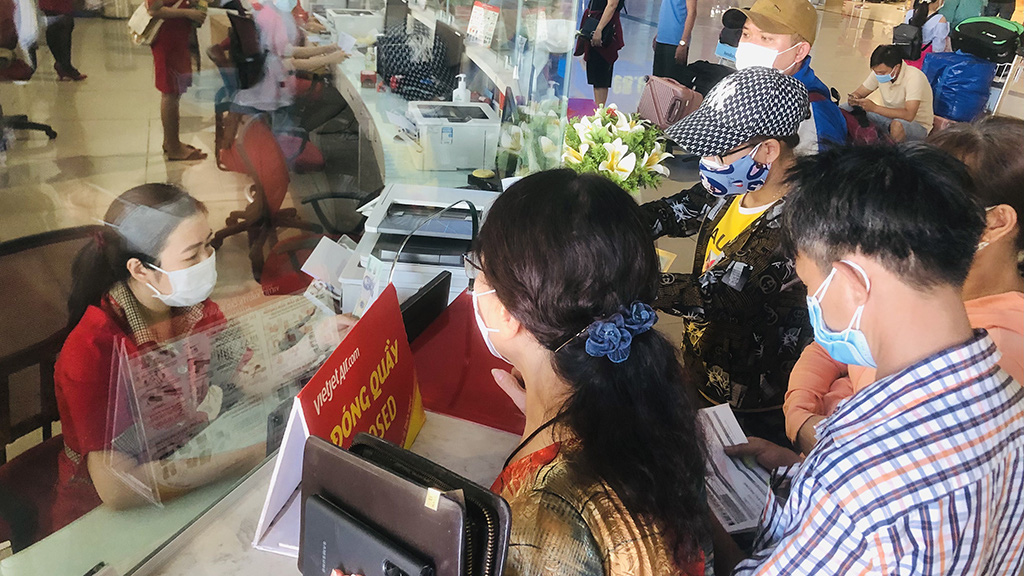 Many people left Ho Chi Minh City and returned to their hometowns prior to the implementation of social distancing measures on Monday.

Tan Son Nhat International Airport was crowded on Sunday after the chairman of the municipal People’s Committee announced that a 15-day social distancing period would begin from 0:00 on Monday.

Travelers did not mind buying last-minute flight tickets despite a surge in prices.

A representative of Bamboo Airways said the carrier had to add two new flights to Hanoi on Sunday night.

However, the number of flights may be adjusted in the coming days due to a drop in travel demand, Cuong elaborated.

M., a resident from Quang Ngai Province, said she was about to return to her hometown despite knowing that she would be quarantined at home for 21 days.

“I still prefer it to staying in Ho Chi Minh City during a social distancing drive,” the woman added.

Many other residents who hail from provinces near Ho Chi Minh City have also rushed to leave the metropolis by coach, long-haul bus, or motorbike.

During the 15-day social distancing period, the entire city has to follow strict measures under the prime minister’s Directive No. 15.

Gatherings of more than five people outside office buildings, schools, and hospitals, as well as meetings with more than 20 people in one room are prohibited.

People should keep a safe distance of at least two meters in public places, while non-essential businesses and services will remain closed.

Meanwhile, Go Vap District and Thanh Loc Ward in District 12, the two largest hot spots in the city, have to comply with stricter measures.

The country has recorded 4,164 local infections in 34 provinces and cities since April 27, including 157 cases in Ho Chi Minh City.