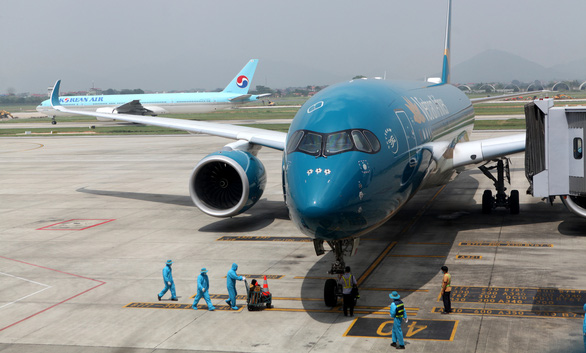 The CAAV ordered the resumption of international flights to Noi Bai and Tan Son Nhat in an urgent document sent to airlines, airport authorities, and the administrative board of the two airdromes.

The authorization procedures for these flights will also return to normal, the letter stated.

Lower-level airports and aviation authorities are required to promptly work on the resumption after receiving the document.

According to the CAAV, the order is a response to guidance from the National Steering Committee for COVID-19 Prevention and Control and the Ministry of Transport.

On May 31, the aviation authority decided to bar international flights from Hanoi from June 1 until the end of June 7 as part of an effort to contain the current coronavirus outbreak.

Under restrictions in the city, public gatherings of more than 10 are banned, while those aged 60 and over are advised to stay indoors. Non-essential businesses have been halted.

After successfully containing COVID-19 for most of last year, infections in Vietnam have risen since late April, accounting for more than half of the 7,972 cases registered among its population of 98 million.

The country still has one of the world’s lowest caseloads. There have been a total of 49 virus-related deaths reported in the country so far.