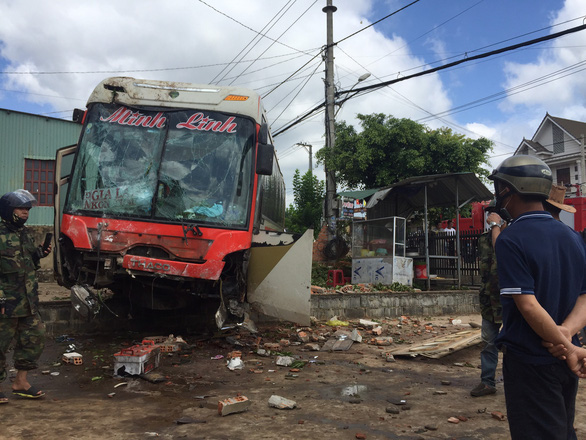 The deadly crash happened on National Highway 14 in the highland province’s Buon Ho Town at 8:00 am on June 6, between one coach, two trucks, and two motorbikes, said the provincial traffic police.

The incident began when the larger of the trucks, reportedly due to brake failure, suddenly rear-ended the coach running ahead while they were traveling on the Ha Lan Pass in the town.

At that time, the coach was transporting eight passengers while the truck was carrying fertilizers to Ea Hleo District from the province’s Ban Me Thuot City, VnExpress reported.

Being hit hard, the coach slammed into some houses along the pass but caused no casualties.

Right after hitting the coach, the larger truck collided with the smaller one moving in the opposite direction, causing it to fall on its side.

The larger truck continued to hit two motorbikes before it turned on its side, too.

One of the bikes was ridden by a woman carrying her 14-year-old son.

Consequently, the teenager and the 32-year-old assistant to the larger truck driver died on the spot, while five injured people were taken to hospital for emergency care.

All the vehicles involved were heavily damaged.

Local traffic police have examined the scene and are investigating the fatal accident.