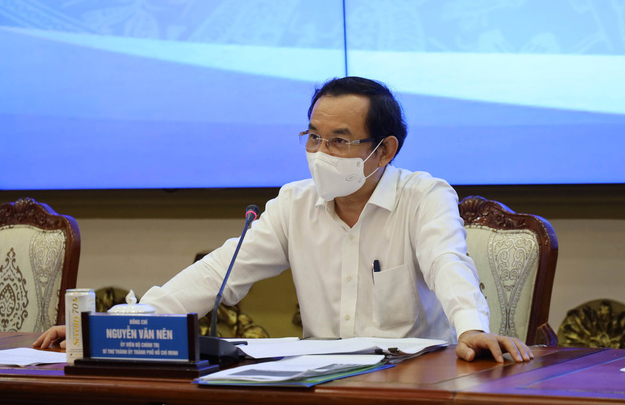 Ho Chi Minh City has planned to give COVID-19 vaccination to all its population as soon as possible and expects that two-thirds of its residents will be immunized by the end of this year, local leaders have stated.

Nguyen Thanh Phong, chairman of the municipal People’s Committee, made this statement at a conference with representatives of local businesses affected by the COVID-19 pandemic on Thursday, with a focus on the vaccination progress.

The city has set up a specific roadmap for vaccination from now until the end of 2021 and the first quarter of 2022, under which vaccination will be given to two-thirds of its population no later than the end of this year, the chairman said.

The city government has negotiated with vaccine manufacturers, including one from Russia, to purchase vaccines for immunizing its entire population, Phong said.

Nguyen Van Nen, secretary of the municipal Party Committee, told the conference that he had a phone talk with the Vietnamese health minister about COVID-19 vaccine purchase and realized that it is very hard to access vaccine sources now.

The city will therefore carry out its vaccination strategy on a priority basis, the leader said.

Enterprises are encouraged to import COVID-19 vaccines, and the health ministry will assist them in inspecting vaccine quality as well as vaccination procedures, Nen said.

While waiting for jabs to arrive in the city, local businesses should strictly comply with epidemic prevention measures to ensure safety for their workforces and maintain their normal operations, he advised.

At the conference, businesses said that inoculation is the decisive and fundamental factor to deal with the pandemic.

Businesses have so far suffered heavy impacts from the pathogen since it first hit the country in early 2020, many corporate representatives told the conference.

Nguyen Dang Hien, vice-president of the Food and Foodstuff Association of Ho Chi Minh City, said that the association’s members are genuinely worried about their employment amid the coronavirus spread, despite their increased expenditures on epidemic prevention measures.

“Manufacturing will be suspended if a coronavirus infection is detected among workers, despite any support from the government, such as loan funding or tax rebates,” Tong said.

Having inoculated over 73,000 people after two stages of its immunization program that started on March 8, the city is now in the third stage of vaccination for around 72,000 more people, local health authorities reported.

Nationwide, more than 1.4 million doses of vaccine had been administered by 4:00 pm on Thursday, and the number of people having received their second shots had topped 50,000, the health ministry said.

On Friday noon, the ministry confirmed 82­­­ new COVID-19 patients, including 81 domestic and one imported case.

Among these new cases, 45 were detected in Bac Giang Province and 18 were recorded in Ho Chi Minh City.

The newest cases have taken Vietnam’s caseload to 9,917, including 3,708 recoveries and 57 deaths.

Since the pandemic’s fourth wave erupted on April 27, the country has documented 6,718 infections, the ministry said.