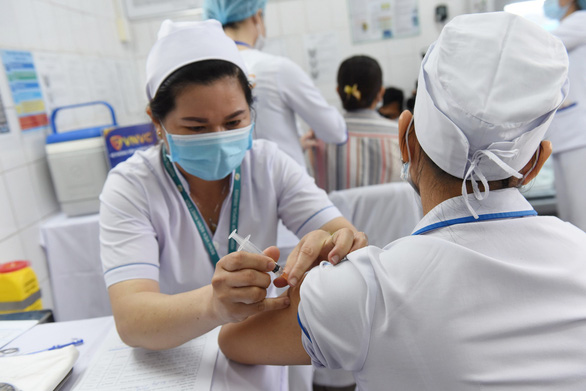 The number of vaccinated employees at a COVID-19 treatment hospital in Ho Chi Minh City diganosed with the respiratory disease jumped to 53 on Sunday after a score were detected a day before.

An additional 31 employees at the Ho Chi Minh City Hospital for Tropical Diseases tested positive for the novel coronavirus on Sunday as the institution finished screening all 887 staff members.

The hospital had found 22 infections among its employees on Saturday.

All 53 patients were already inoculated with two doses of AstraZeneca vaccine before their diagnosis, the hospital said, adding all but one case were asymptomatic.

The source of contagion may come from outside the hospital, according to an epidemiological investigation.

Contact tracing is underway to break this infection chain while 88 seriously-ill patients treated for tetanus, encephalitis, HIV/AIDS, and chronic liver disease have tested negative for the virus, according to the hospital.

The local health department decided to turn this hospital into a specialized COVID-19 treatment facility earlier this week.

The hospital, now locked down, is treating a total of 94 coronavirus patients, 35 of whom are in critical conditions.

Vietnam has been hit utterly hard by a fourth virus wave since April 27, with 7,230 local infections having been recorded in 39 of its 63 provinces and cities ever since, according to the Ministry of Health’s data.

Bac Giang Province in the north is leading the fourth round’s tally with 4,012 patients, followed by northern Bac Ninh Province with 1,327, Ho Chi Minh City with 745, and Hanoi with 459.

Recoveries have reached 3,827 while 59 patients have died, most with critical underlying medical conditions like cancer and chronic renal failure.

Almost 1.5 million AstraZeneca vaccine shots have been administered to medical staff and other frontline workers since inoculation was rolled out on March 8.

More than 54,000 people have been given two doses as of Sunday.