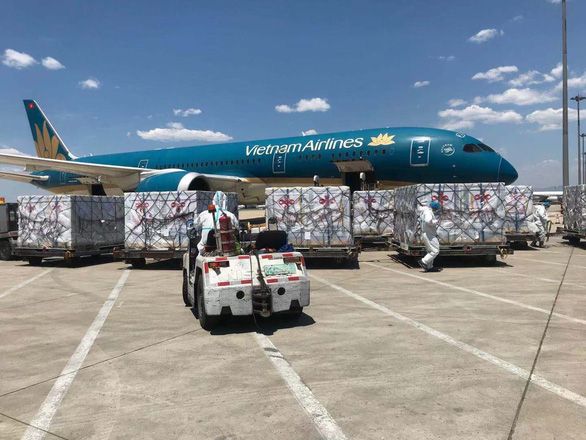 A shipment of 500,000 Sinopharm coronavirus vaccine doses touched down in Hanoi on board a Vietnam Airlines aircraft on Sunday, adding to the country’s stock of AstraZeneca and Sputnik V jabs, according to the Ministry of Health.

The plane landed from Beijing at Noi Bai International Airport in the Vietnamese capital at 3:10 pm, the national carrier said in a statement.

The shipment also includes 502,400 syringes, the Ministry of Health added.

The Sinopharm vaccine shots, donated by China, will be used to immunize Chinese nationals in Vietnam, Vietnamese people who want to study or do business in China, and those who reside along the borders with China, the health ministry elaborated.

The ministry approved the jab for emergency use in Vietnam on June 3, following similar approvals for AstraZeneca, Sputnik V, and Pfizer vaccines.

The World Health Organization (WHO) listed the Sinopharm COVID-19 vaccine for emergency use on May 7, according to a news release posted on the global health agency’s website the same day.

The WHO had already given emergency use authorization to AstraZeneca, Johnson & Johnson, Pfizer, Moderna, and Sinovac vaccines.

More than 450 million Sinopharm doses have been supplied to over 70 countries and the COVAX vaccine-sharing scheme as yet, the health ministry said.

Vietnam has received nearly four million AstraZeneca shots from the COVAX scheme, direct purchase via a local company, and Japan, in addition to 2,000 Sputnik V jabs donated by Russia and 500,000 Sinopharm doses in the year to date.

The Vietnamese government has administered 2,359,376 AstraZeneca jabs to medical staff and other frontline workers since inoculation began on March 8.

Vietnam set a target of securing 150 million vaccine doses and inoculating two-thirds of its population of almost 98 million people this year.

So far the health ministry has recorded 13,211 patients, including 9,944 local infections since April 27, when the fourth and worst virus wave broke out in the country.

Recoveries have reached 5,229 while 66 patients have died, most with critical pre-existing medical conditions.