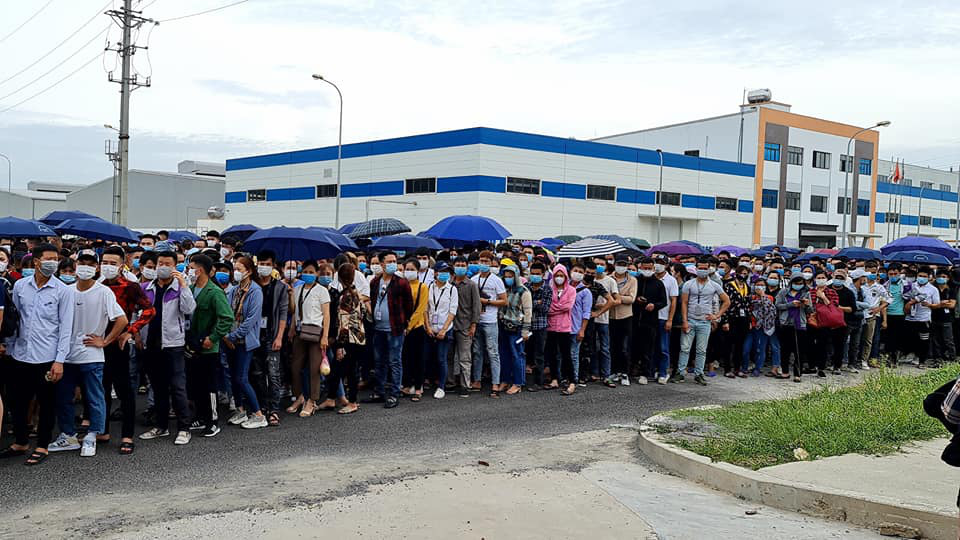 Authorities in northern Bac Giang Province have found one COVID-19 case among thousands of workers at a company in Van Trung Industrial Park, Viet Yen District after they underwent mass  testing early this week.

Luxshare ICT Ltd., an assembler of Apple’s AirPods wireless earphones, in Van Trung Industrial Park had its workers tested for COVID-19 on June 29 in preparation for the resumption of its operations, which have been suspended since Bac Giang became a COVID-19 hotbed in Vietnam in early May.

Poor testing organization resulted in a sea of workers standing side by side, with no social distancing, at the company on the testing day.

Before the operation suspension, the Vietnamese AirPods maker had hired about 22,000 workers.

Functional forces did not announce the number of workers attending the COVID-19 testing session on June 29.

Of the tested workers, V.V.T., 31, hailing from Yen Dung District, had his result return positive for the coronavirus, Nguyen Thi Thu Huong, deputy director of the Bac Giang Department of Health, said on Friday afternoon.

T. had tested negative for the pathogen twice on May 18 and 29 and received his first jab of COVID-19 vaccine on June 3, according to Huong.

T. began to lose his sense of smell on June 13 before participating in the mass testing session on June 29 and being confirmed to contract the virus.

His infection, however, poses an extremely low risk of transmission, according to Huong.

The medical center of Viet Yen District and Luxshare ICT Ltd. have traced people who had come into interaction with the patient, with 34 direct contacts having been found in his residential area and the company so far.

“All of the related people tested negative for the virus on Thursday evening,” Huong said.

Huong’s health department has proposed the provincial People’s Committee impose a penalty on Luxshare ICT Ltd. for its poor testing organization while warning other companies across the province against such violation on social distancing and pandemic prevention, Huong added.

Vietnam had documented 18,360 COVID-19 cases as of Saturday morning, with 7,395 recoveries and 84 deaths, according to the Ministry of Health.

The country has recorded 14,901 local infections in 52 provinces and cities since a new outbreak began on April 27.

Bac Giang Province, with 5,658 confirmed COVID-19 cases, has been the hardest hit of any Vietnamese locale during this current wave.