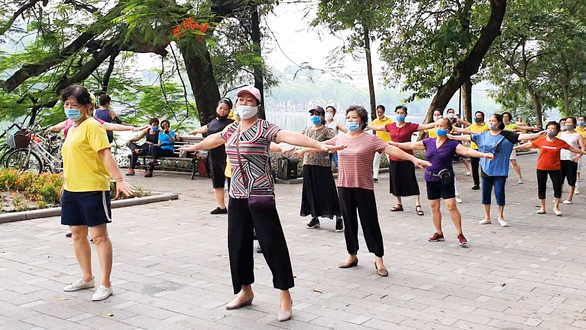 Hanoi authorities have restored a ban on outdoor exercise which had been lifted just a few weeks ago following the resurgence of the novel coronavirus.

The prohibition was mentioned in an express dispatch from the Hanoi People’s Committee addressing adjustments to the city’s guidelines for COVID-19 prevention and control.

As pointed out by the document, the coronavirus epidemic in the southern region is escalating, with Ho Chi Minh City recording 9.895 patients since the fourth wave broke out in late April, making it the largest epicenter in Vietnam at the moment.

This could potentially lead to another outbreak in Hanoi if the traffic flow from these areas to the capital city is not closely monitored.

They were also told to uphold the Ministry of Health’s COVID-19 prevention guidelines, while also promoting social distancing messages.

The city began to prohibit all outdoor exercise activities until further notice on Thursday.

The Northern Airports Authority, the Hanoi Gas Station, and the municipal Department of Transport are required to enforce medical declaration and social distancing compliance on all arrivals to the city, including those who come from low-risk areas.

Residents have been asked to closely monitor their health conditions and promptly report themselves to health authorities if they find symptoms of a fever, coughing, a sore throat, dyspnea, or loss of taste.

This is but one of various measures that Hanoi has introduced to combat the latest developments of the epidemic in the last few days.

Those from Ho Chi Minh City will be subjected to three COVID-19 tests in the first seven days of their arrival, followed by another seven days of self-monitoring at home.

Residents have also been prohibited from gathering in groups of more than ten in public, while dine-in restaurants must be closed by no later than 9:00 pm to ensure safety.

The capital has recorded a total of 490 transmissions since the fourth virus wave erupted on April 27, according to Tran Thi Nhi Ha, director of the local Department of Health.

Thanks to prompt contact tracing and the isolation of high-risk communities, Hanoi seemed to have put the outbreak under control, which underpinned its decision to reopen several activities and services, including outdoor exercise, coffee shops, dine-in services, and barbershops in late June after a month-long ban.

As the city has reported new cases in the past few days after going almost two weeks of a clean track record, city leaders decided to reconsider easing restrictions.

“This is an important time and there is no room for negligence and complacency,” officials stated.

“It requires the participation of authorities of all levels to quell the spread of the epidemic and prevent another outbreak.”