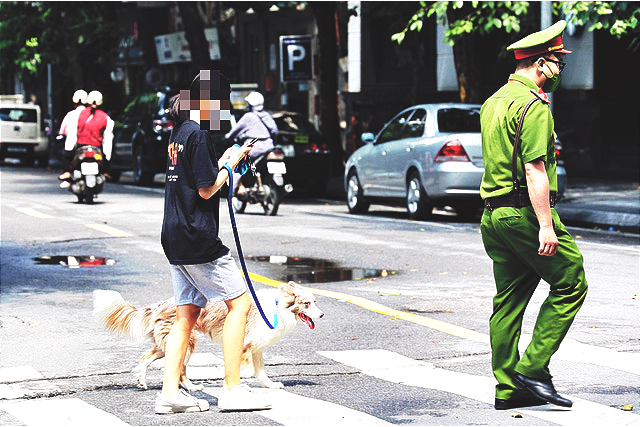 A woman has been fined for taking her dog outside for a walk during a strict social distancing period in Hanoi.

Police in Hang Trong Ward, Hoan Kiem District confirmed on Saturday they had imposed a VND2 million (US$87) fine on L.H.H. for leaving her house without a proper reason.

H. was walking her dog along a street in Hang Trong Ward earlier the same day when she was approached by an officer.

During a working session at the police station, the woman stated she was not aware of current social distancing regulations in the capital.

Police in Hoan Kiem District also booked seven other people for going outside without appropriate reasons on Saturday.

Six residents in the district were fined a combined VND12 million ($522) for failure to wear face masks in public.

Hanoi chairman Chu Ngoc Anh decided to enforce extensive social distancing measures under the prime minister’s Directive No. 16 for 15 days from 6:00 am on Saturday over rising new local infections.

People are required to stay home and only go outside for food, medicine, hospital treatment, COVID-19 vaccination, and working at offices and businesses that are allowed to open.

Vietnam had documented 94,913 COVID-19 cases as of Sunday morning, with 17,583 recoveries and 370 deaths, according to the Ministry of Health.

The country has recorded 91,165 local infections in 62 provinces and cities, including 899 cases in Hanoi, since the fourth outbreak began on April 27.