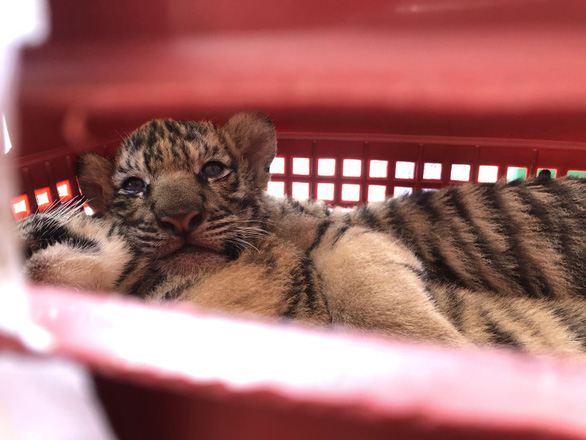 Two men have been arrested after they were caught transporting seven live baby tigers for sale in the north-central Vietnamese province of Nghe An, local police reported.

At around 4:00 am on the same day, Lai and Hieu were traveling in a car in Nghe An’s Dien Chau District when a traffic police team signaled them to stop for inspection after receiving a tip-off that the vehicle was likely carrying wildlife.

The men did not stop their car but drove at the police team before trying to escape.

Police officers were eventually able to stop the runaway car.

They searched the car and found seven healthy tiger cubs stashed in four plastic containers inside.

Lai and Hieu failed to show police any documents proving the origin of the wild animals, simply saying they were transporting them to Nghe An for sale.

The team seized all the tiger cubs and handed them over to the Pu Mat National Park in the province’s Con Cuong District for care and nurturing.

Four years ago, provincial police arrested a man of Dien Chau District for storing five dead big cats in a freezer in his house.

The animals, which all had been cut open and had their organs removed, were estimated to have weighed up to 150 kilograms when they were still alive, police said.

Transporting, trading, capturing or killing wild animals or parts thereof is a criminal offense in Vietnam punishable by between six months and 12 years in prison, according to the Penal Code.

As some people believe that tiger-derived products can cure bone and joint illnesses, tigers are in demand in Vietnam for their meat, bones, and skin.

The Lower Mekong region, which comprises Cambodia, Laos, Myanmar, Thailand, and Vietnam, has long been recognized as a hotbed for illegal wildlife trade, according to TRAFFIC, a non-governmental organization operating as a global wildlife trade monitoring network.

Between 2019 and 2020, nearly 78,000 illegal wildlife parts and products were found for sale in more than 1,000 outlets in the five countries, TRAFFIC reported.