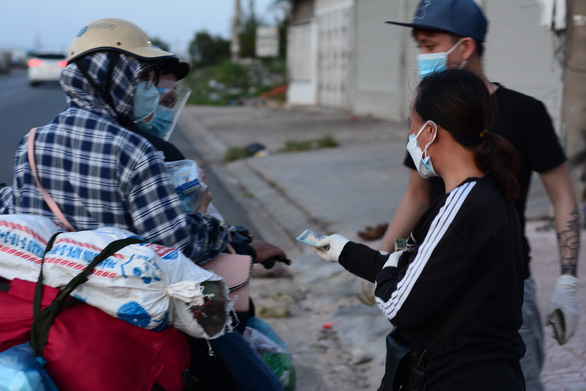 A woman has recently gone viral on social media in Vietnam for giving away banknotes worth VND500,000 (US$22) each to internal migrants, many of whom are heading home as the ongoing COVID-19 outbreak has jeopardized their jobs in big cities.

These days, Tran Hue from south-central Binh Thuan Province can be seen at a charity food and drink stall for homebound migrant workers on the roadside of the province's Phan Thiet City, with her hand holding a stack of VND500,000 notes.

Busy as she seems on the phone, the woman still keeps a keen eye on the passing traffic on the road.

As she spotted a group of motorbike riders leaving Ho Chi Minh City dropping in the stall, Hue jumped off her chair, handing out the bank notes she was holding to the crossing people as they were picking up charity items.

Seeing the bizarre act, the group froze for a moment before realizing it and repeatedly thanking Hue for her benevolence.

As the bikers left, Hue returned to her seat, taking a brief rest before welcoming the next group.

Speaking about her charitable work, Hue said she wishes to help out the internal migrant workers, who are leaving big cities and industrial hubs in southern Vietnam for their hometowns since the recent resurgence of COVID-19 epidemic has made a majority of them redundant and vulnerable to health risks.

As she saw local people establishing a makeshift pit stop to help homebound workers, she decided to lend a helping hand, even kicking in financial support out of her pocket.

According to Hue, she came from the south-central province of Binh Dinh and then moved to Binh Thuan for work some 10 years ago.

Her hard work soon paid off, making her the owner of a lucrative sea product wholesale facility in Phan Thiet.

On top of that, Hue also exhibited a commitment to philanthropy work, vowing to donate a large part of her possessions to underprivileged people.

Much of her charity, however, stays low-profile — the only thing she focuses on is to give without self-interest.