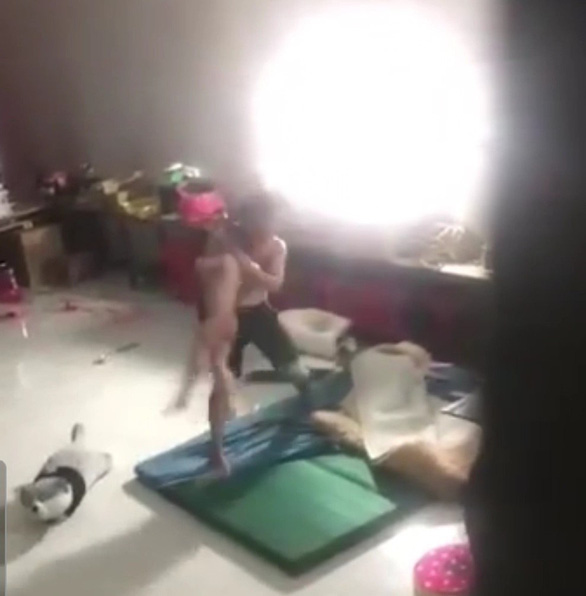 A man has been detained for investigation after a video capturing his cruel abuse of a child spread on social media in Vietnam.

Police in Binh Duong Province on Thursday said they have arrested 29-year-old Le Hoai Nam, a temporary resident in the province’s Thuan An City, for a probe into his child abuse.

The arrest was made on Wednesday night after a four-minute video clip showed Nam continuously beating, slapping and kicking the boy, and even lifting the child up and slamming him down on a mattress, in front of a woman who witnessed the brutalization.

In the footage captured in a house in the city’s Binh Chuan Ward, the boy, unclothed, constantly called Nam 'dad' but the man did not stop, even hitting the boy stronger and expelling him from home.

Meanwhile, the woman the five-year-old boy called 'mom' did not prevent the man from beating him.

It was not until the man threw the boy to the mattress that she rushed to the scene to hold the child in her arms and beg the man to stop his cruelty.

The abuser, however, attacked both the mother and the boy, and said he would leave the house if the child was not sent to his grandparents.

Police officers are making verification to handle the case after Nam admitted to his brutal actions.

Thousands of people who viewed the clip on Facebook have expressed their indignation against Nam and demanded strict punishment for him.

Previously, a woman and her partner in the same province were imprisoned for brutalizing a four-year-old girl, the woman’s own daughter.

The little girl was later left in the care of her blood father who had divorced her mother.