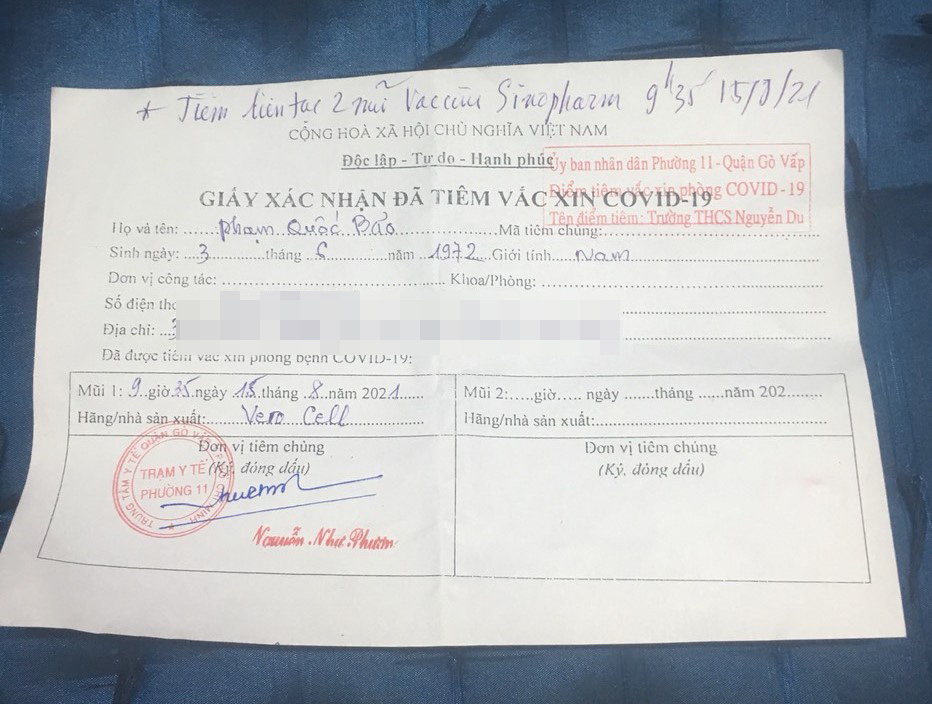 A middle-aged man in Ho Chi Minh City was injected with two consecutive doses of Vero Cell vaccine in less than one minute on the weekend.

On Sunday morning, Bao came to a vaccination point at Nguyen Du Middle School in the district’s Ward 11 for a COVID-19 vaccine shot.

After having his heart rate and blood pressure measured, he was directed to a vaccination table where a nurse gave him a shot of Vero Cell vaccine, developed by China’s Sinopharm.

After the injection, the nurse wrote on the screening sheet that the man had received the first COVID-19 vaccine jab.

When Bao stood up, another nurse at the next table asked him to come over and sit down, and just in the blink of an eye, he was administered the second shot.

“I saw that nurse holding a piece of medical cotton so I thought she would give my injection site some more antiseptic," Bao told Tuoi Tre.

"When I felt pain and turned to the nurse, she had finished the second injection."

The nurse then said she had done it by mistake when questioned by Bao, the man recited.

A representative of the inoculation point came and blamed Bao for letting the nurses give him two shots in a row, the man recounted.

He got home at noon and his self-measured heart rate amounted to 124 beats per minute.

In panic, Bao phoned the resuscitation doctor at the immunization point and was asked to return there for a vaccination certificate.

The person who gave him the certificate blamed him for the regretful incident.

“That person said I was at fault as I did not leave after receiving the first shot, but sat down at the next table for the second jab,” Bao recounted.

On the evening of the same day, a representative of the Ward 11 authorities confirmed the incident and said that they had visited Bao and assigned a doctor to monitor his health.

Dr. Vu Van Dao, who was in charge of resuscitation at the immunization point, told Tuoi Tre that Bao was in stable health conditions.

Asked whether the health of a person is affected after receiving two consecutive vaccine shots, the doctor said that such an incident would generally not affect the vaccinated person’s health much.

“I have given Bao my phone number and Zalo [a chat app] connection for contact any time when necessary,” Dr. Dao said.