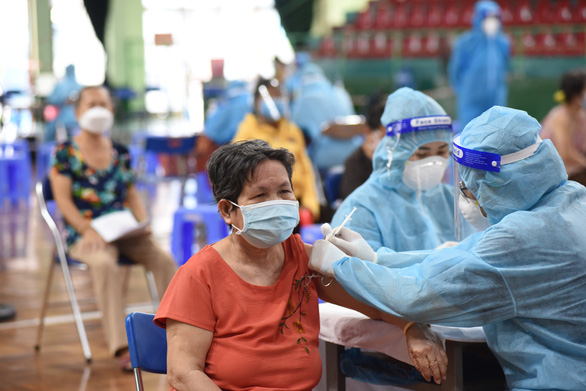 Ho Chi Minh City health personnel are offering Pfizer-BioNTech as second doses for those who received Moderna as their first COVID-19 jabs, a decision that stems from the scarcity of the latter vaccine.

As witnessed by Tuoi Tre (Youth) newspaper correspondents on Monday, many residents of District 11 showed up at the vaccination venue at the local Dai Thanh Elementary School to get their second jabs against COVID-19.

They should have received their second shots of Moderna 28 days after their first, according to the general recommendation.

However, the majority of the vaccine takers were informed that they would not get the Moderna jab this time, even if they had them as their first shots. Instead, they will be administered the Pfizer-BioNTech vaccine.

In the past few days, the mix-and-match of Pfizer and Moderna jabs has also been rolled out in various locales of Ho Chi Minh City, including District 11, Binh Thanh District, and Thu Duc City.

It is considered an alternative for Ho Chi Minh City to cope with the current shortage of Moderna doses, which have been given to hundreds of thousands of city residents as first jabs against COVID-19.

As seen at the vaccination sites, many vaccine takers gave their consent to the jab combination, one of whom is Thai Long, 66, a resident of District 11.

According to Long, he was not informed about the mix-and-match until he arrived at the inoculation venue at Lanh Binh Thang Sports Hall. Despite exhibiting high heart rates and blood pressure readings in the pre-screening, he still agreed to the vaccine change.

“I got Moderna as my first COVID-19 jab on August 4, and am now eligible to get the follow-up shot," he said.

“I’m fine with having Pfizer as the second shot – just having a second dose is good enough for me.”

At the same venue, N.V.P., 73, from District 11, said he was notified of having Pfizer-BioNTech as the follow-up to his Moderna jab as well as the city’s lack of Moderna vaccines before he reached the vaccination site.

P. preferred having the same vaccine as he did the first time, but decided that it was better to take the second jab now rather than later, he added.

On Monday, medical staff at the vaccination venue at Lanh Binh Thang Sports Hall administered 540 follow-up doses of Pfizer-BioNTech to residents with Moderna jabs in their record, with the vaccine takers’ full consent.

In the current condition of vaccine scarcity, the mix-and-match of jabs, namely Moderna/AstraZeneca for first doses and Pfizer-BioNTech/Moderna for second doses, is a viable option, according to Doctor Truong Huu Khanh, former head of the infectious disease ward at Ho Chi Minh City’s Children Hospital No.1.

“Multiple countries have implemented the vaccine mix approach and reported potent protection against the coronavirus,” Dr. Khanh pointed out.

“We should make sure that residents get their vaccine as soon as possible to fortify insulation against the disease.”

While shipments of the latter three vaccines arrived in Ho Chi Minh City in substantial numbers, there have been no new batches of the Moderna vaccine delivered to the city.

Ho Chi Minh City’s vaccination campaign requires at least 446,118 Moderna doses to administer as follow-up jabs to those who get the jab from August 1 to 15, officials estimated.