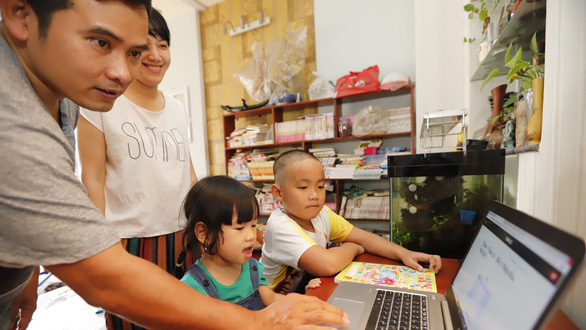 As students in Ho Chi Minh City have started their new school year in online classrooms, parents across the southern metropolis are scrambling to find laptops, tablets, and smartphones so their children can use to log into classes.

Demand for laptops in early September doubled compared to one year ago, according to a representative from electronic retailer The Gioi Di Dong.

Similarly, Nguyen The Kha, director of the telecom-mobile unit of FPT Shop system, said its August sales increase by 60 percent compared to the same period last year, thanks to a 50 percent growth in demand for laptops and tablets.

Kha attributed the soaring demand to the massive amount of Ho Chi Minh City residents working and studying from home.

He also noted that the best-selling brands at FPT stores at the moment are Apple, Samsung, Masstel, and Lenovo.

“50 percent of our revenue came from the tablet and laptop sales,” a company associate said.

“In late August, right before the new school year, our average daily tablet sales were about three times higher than normal days and twice as much as our pre-COVID numbers,” he added.

As the 2011-22 school year has come with classes held entirely online, parents in Ho Chi Minh City are scrambling to prepare their children for distance learning.

Xuan Mai, the mother of a K-12 student in Ho Chi Minh City, said she and her family left most of their belongings at home when they fled the city before the start of a strict social distancing mandate back in July.

Now, quartered in her hometown where electronics retailers are few and far between, she was having trouble finding a device suitable for her child’s studies.

“I thought our stay in the countryside would end before the new school year, so it didn’t really cross my mind to bring school supplies.”

“I just bought a new laptop, headset, and webcam for his online classes, but it was difficult because there are still strict social distancing rules here.”

Meanwhile, those who chose to remain in the city have not had it much easier.

“Most stores are closed, so I had to scour the internet for suppliers and figure out how quickly they could deliver and whether or not I’d be able to receive the delivery before classes started.

“I thought it would be easy but it took several days,” said Hoang Hai, a parent in District 1.

For lower-income families, buying new devices is not an option, leading many to purchase unreliable products that are not quite adequate for the online learning environment, particularly at a time when professional IT support is out of reach due to travel restrictions and closures.