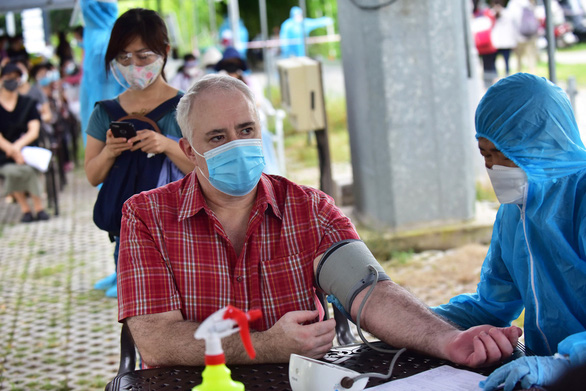 Hanoi has provided inoculation against the novel coronavirus for around 4,000 foreigners over the past four days, as part of the Vietnamese capital city’s ongoing plan to vaccinate all foreign residents, according to local health authorities.

Eight of the expected 30 vaccination lines were ready on Wednesday, when the municipal Department of Health kicked off the vaccination plan at My Dinh National Stadium in Nam Tu Liem District.

The district’s health center was assigned to coordinate with the 115 Emergency Center and Hanoi International Friendship Hospital JSC to ensure safety for all foreigners.

Some 4,000 foreigners had been inoculated as of Saturday, according to statistics.

Lists of foreigners for vaccination have been made through embassies, foreigner management agencies, and local police.

Before getting vaccinated, foreigners have to go through medical screening, including body temperature and blood pressure measurement, medical history reference, and consultancy.

Hanoi, with eight million people, has conducted its vaccination campaign for local residents since March 9.

As of Sunday morning, around 97 percent of 5.75 million people aged 18 and older in the capital city has been injected with at least one jab, according the national COVID-19 Vaccination Portal.

By Saturday evening, Hanoi had documented 4,394 COVID-19 cases, including 49 deaths.

Except Cao Bang, the coronavirus has spread to 62 out of Vietnam’s 63 cities and provinces, causing 667,650 infection cases.

Recoveries have topped 433,400 while the death toll has reached 16,637, equivalent to 2.5 percent of the tally of patients, or 0.4 percentage points higher than the global mortality rate.

Ho Chi Minh City has been affected the most with 331,552 infections and 13,099 deaths, the health ministry said.