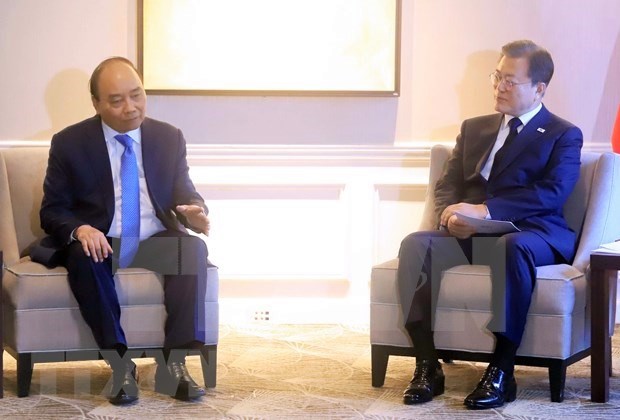 S.Korea to donate one million COVID-19 vaccine shots to Vietnam next month

South Korean President Moon Jae-in has announced that his country will provide Vietnam with at least one million doses of COVID-19 vaccine next month.

The donation was announced during President Moon’s meeting with Vietnamese State President Nguyen Xuan Phuc on the sidelines of the 76th session of the UN General Assembly in New York on Tuesday, according to spokesperson Park Kyung-mee.

The vaccine jabs are expected to be delivered in October.

This will be South Korea’s first direct vaccine donation to another country aside from its financial support for the COVAX Facility, a global initiative working to guarantee fair and equitable access to COVID-19 vaccines for every country in the world.

During their conversation, the two leaders agreed that South Korea and Vietnam are close partners with deepened cooperation in various fields, including politics, economic matters, and diplomacy.

Both sides consented on making efforts to further enhance bilateral relations on the occasion of the 30th anniversary of diplomatic ties in 2022.

In 2009, the two countries upgraded their relations to a strategic cooperative partnership.

The leaders exchanged views on the security situation on the Korean Peninsula and agreed to establish and maintain close partnerships.

President Moon also asked Vietnam to continue ensuring safety for Korean people and businesses in Vietnam during the pandemic.

In early August, the Consulate General of South Korea in Ho Chi Minh City announced that the South Korean government would donate 7.5 million vaccine syringes to the southern city.

The South Korean community in Ho Chi Minh City and the Korean Chamber of Commerce and Industry (KoCham) have also donated VND57.5 million (US$2,500) to assist in the city's pandemic prevention and control efforts.

Vietnam aims to immunize at least two-thirds of a population of nearly 98 million against COVID-19 by the first quarter of next year.

About 35 million vaccine doses have been administered since inoculation was rolled out on March 8, with nearly 6.8 million people fully vaccinated.