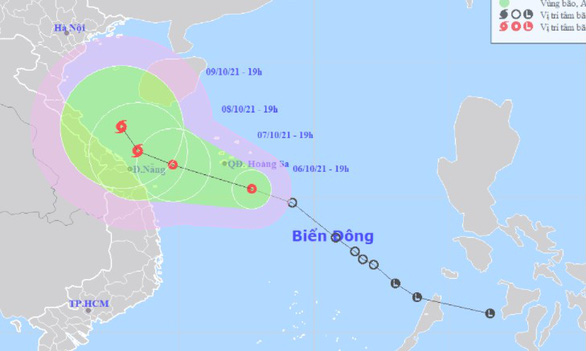 Provinces in Vietnam were told to brace for heavy rains, flooding, and landslides ahead of the low-pressure trough that entered the East Vietnam Sea on Wednesday.

As of 7:00 pm on Wednesday, the low-pressure trough’s center was located 180 kilometers southward away from Vietnam’s Hoang Sa (Paracel) archipelago, with wind forces measured at 40-50kph and gusts reaching 62-74kph, according to the National Center for Hydro-meteorological Forecasting.

It then moved east-northeast toward central Vietnam, traveling at about 15kph through Wednesday night and into Thursday morning.

By 7:00 pm on Thursday, meteorologists predict it will reach the coast of Vietnam’s Quang Tri and Quang Ngai Provinces, with wind forces increasing to 50-60kph and gusts at 75-88kph.

From there, it will proceed north-northeast at a speed of 5kph for 48-72 hours, causing rough waters in the East Vietnam Sea, winds of 40-60kph, gusts of up to 88kph, waves of up to four meters high, and chances of rain, thunderstorms, and tornadoes.

Also under the effect of the trough, the central provinces from Quang Binh to Phu Yen, as well as Kon Tum Province in the Central Highlands, will see heavy rain with precipitation ranging from 300-600 millimeters during each downpour.

Meanwhile, the provinces from Binh Dinh to Phu Yen, as well as Gia Lai Province in the Central Highlands, are expected to see 100-350 millimeters of rain during each downpour.

The north-central and northern flatland provinces were told to brace for chances of heavy rain from October 9 to 12, with likely flash floods, landslides in upland areas and local flooding in lowland areas.