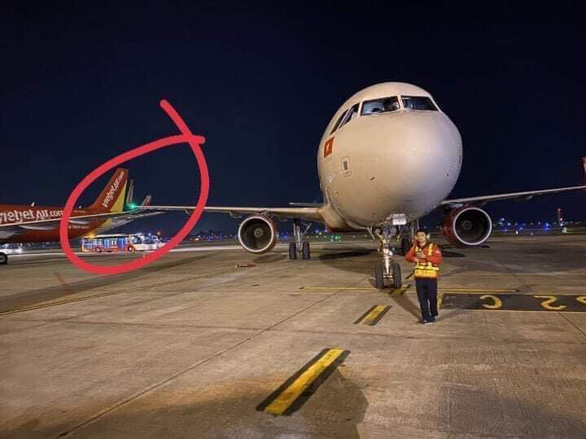 A collision between two Airbus aircraft of Vietnam’s budget carrier Vietjet Air occurred at Noi Bai International Airport in Hanoi on Saturday, the second event at the same airport this month, according to aviation authorities.

The incident happened at around 6:09 pm on Saturday when a parked Airbus A321 Neo plane was hit by another which was rolling onto the apron after its landing, director of the Civil Aviation Authority of Vietnam (CAAV) Dinh Viet Thang told Tuoi Tre (Youth) newspaper.

When the aircraft coming from Lam Dong Province’s Da Lat City was entering the parking area, its wingtip banged against that of the other plane parked nearby.

The hit caused the parked plane’s left wingtip to break and fall to the ground while damaging the right wingtip of the rolling aircraft.

The collision led to no casualties.

All 120 passengers and seven crew members on board the flight from Da Lat disembarked their plane safely after the incident.

The Northern Airports Authority and relevant agencies have launched an investigation into the case, and took away the practitioner’s certificate of the land signal officer involved in the bump.

They also temporarily revoked the license of the pilot of the flight from Da Lat, Nguoi Lao Dong (Laborer) newspaper reported.

Vietjet Air has suspended the operation of both aircraft, the crew of the flight, and related personnel pending a probe.

At the time of the clash, the weather was dry while the airport markings and signs and the apron lighting were operating normally, the airport authorities reported.

According to initial reports, the crew of the plane from Da Lat might have erred when rolling the aircraft onto the apron, said Tran Hoai Phuong, director of the Northern Airports Authority.

The CAAV on Sunday morning said it has sent a team to the airport to examine the scene and check the black box of the plane that caused the collision to clarify the cause, according to Nguoi Lao Dong.

On November 2, a slight collision between two Airbus A321 Neo aircraft of Bamboo Airways occurred at the same airport.

When one of the planes was being towed to the taxiway for a flight, its elevator hit the cockpit of another plane parked in the vicinity.

The elevator was slightly deformed while the flight deck of the other plane had some scratches.

The CAAV then probed the incident but has yet to announce its conclusion.