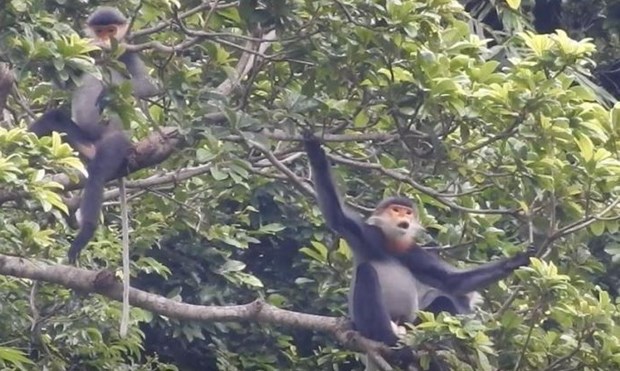 The launch was announced on Sunday, which coincided with the World Environment Day highlighting the significance of conservation of biodiversity, including species, around the world, the World Wildlife Fund - Vietnam said in a statement on its website the same day.

The SCF, which aims to support the conservation of myriad species of wildlife that are only found in Vietnam, is a part of the $38 million USAID Biodiversity Conservation Activity.

The fund is meant to enhance biodiversity conservation in the nation by promoting coordination of local conservation organizations.

Accordingly, the SCF will support local NGOs and research organizations to develop projects for conserving priority species of wildlife by offering awards from $20,000 to $50,000 for projects up to 1.5 years in duration.

“The SCF is a wonderful initiative that will support action at the grassroots level to conserve wildlife, forests, and biodiversity for the future,” Yastishock said.

Vietnam is one of the countries with the highest biodiversity in the world, but decades of illegal logging, hunting, wildlife trade, and conversion of forests to agricultural lands and infrastructure development has led to staggering losses of natural forest and wildlife, with many species on the edge of extinction, according to the statement.

The country is home to many species that are endemic and some are iconic such as Saola, Annamites striped rabbit, and several species of turtle.

The SCF will place a particular focus on supporting conservation and research efforts to ensure endemic and endangered species of wildlife are protected.

Among the largest joint efforts on biodiversity conservation between the governments of the U.S. and Vietnam, the USAID Biodiversity Conservation Activity is a project implemented by WWF in coordination with Vietnam’s Ministry of Agriculture and Rural Development in the 2021-26 period.

Vu Van Hung, deputy director of the Management Board of Forest Projects under the Ministry of Agriculture and Rural Development, said that the USAID Biodiversity Conservation project sites include 21 special use and protection forests.

“We expect that the proposals for SCF will be connected with project activities to increase effectiveness, and will strengthen participation of local organizations in conservation," Hung said.

The SCF will start accepting applications from June 2022, according to the statement.

The fund is expected to strengthen the engagement and coordination among local organizations in species conservation efforts.

Such endeavors are vital to mobilize indigenous knowledge and information on conservation for better evaluation and conservation of wildlife species as well as strengthening the capacity of local conservation organizations in Vietnam.