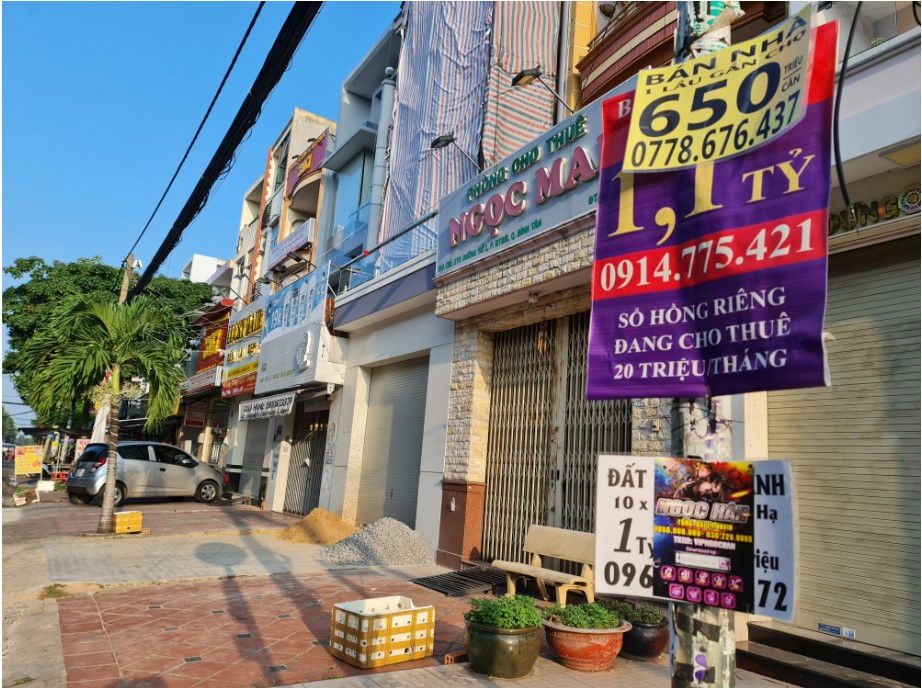 Traditionally, young people looking to buy a home in Ho Chi Minh City would save up for a massive portion of the cost themselves, then seek out financial aid from their families to cover the rest.

More recently, 10- and 20-year mortgages have become a more mainstream means of financing a home.

Now, would-be homeowners looking to keep themselves out of debt are getting a bit more creative, with many investing in rural land, waiting for its value to appreciate, and then selling the land and using the principal and gains to afford a home in the city.

"Five years ago, I was planning to buy an apartment for VND2.1 billion ($90,435) near my office, but one of my friends advised me to buy land instead," shared Nguyen Thi Thanh Hong, 31, a resident of District 6 in Ho Chi Minh City.

According to Hong, the friend who made the suggestion had already been successfully in buying and selling land.

"The price of land was far outpacing that of apartments. It seemed much wiser to own a lot first and then sell it for profit later,” Hong said.

“My friend told me ‘if you do not want to keep investing in land, then you can just sell and buy an apartment. Either way you’ll be successful.""

Though Hong and her husband were nervous, their friend assured them that, if the plan did not go well, he would give them a VND300 million ($12,919) interest-free loan to help them buy an apartment.

Fortunately, a little over two years later Hong and her husband were able to sell the land for a 123 percent gain.

Rather than reinvest their profits, the couple used their gains to purchase their dream apartment.

Though they opted for a slightly more expensive apartment than originally planned, they felt better knowing their mortgage would be significantly lower.

Provinces such as Long An, Tien Giang, Tay Ninh, Binh Phuoc, and Lam Dong are drawing young investors looking to invest anywhere from VND500 million ($21,532) to billions of Vietnamese dong in land and using the gains to buy an apartment in Ho Chi Minh City.

Hong’s younger brother, Nguyen Thanh Hoang, is another of these investors.

Hoang used VND1 billion ($43,064) comprised of his own savings and loans from relatives to purchase a 750-square-meter plot in Lam Ha District, Lam Dong Province.

A year later, he resold the land for a VND750 million ($32,298) profit and used the money to secure a mortgage for a 65-square-meter two-bedroom apartment in District 9.

"If I had not invested in land prior to buying the apartment, it would have been extremely difficult for me to pay the mortgage each month because my and my wife’s salaries are just a combined VND25 million ($1,076)," he shared.

Dreams turn out to be nightmares

Of course, for every successful investor there are dozens whose plans get derailed.

Tran My Tu, 32, a resident of Thu Duc City, shared that she and her husband have been unable to sell their 1,000-square-meter investment property in the Central Highlands province of Lam Dong, thus preventing them from buying an apartment in Ho Chi Minh City.

A year ago, Tu and her husband were asked by friends to invest in real estate in Bao Loc, Lam Dong.

Using VND1 billion ($43,064), much of it borrowed from her parents, Tu planned to buy a small plot in the center of Bao Loc, but was eventually persuaded by a middleman to buy a larger plot in a more remote area of Lam Dong Province because it was bigger and offered "a beautiful view of the mountainous region."

Unfortunately, legal issues have made it difficult for Tu and her husband to sell and the couple have found themselves stuck with the property and unable to purchase an apartment for themselves.

N.T.H., a 27-year-old bank employee in Ho Chi Minh City, District 5, has found herself in a similar situation.

H. bought a 125-square-meter plot of land in Duc Hoa District, Long An Province last year for VND1.2 billion ($51,677), hoping gains on the investment would allow her to buy an apartment in Ho Chi Minh City.

H. mortgaged her parents’ house to afford the property in Duc Hoa, but has been unable to sell the land and is running out of savings while playing the monthly interest on the mortgage.

"I haven’t seen any profits from my investment, and I have to pay the mortgage each month after receiving my salary. It makes me very tired and worried,” H. said.

"Anyone who chooses to invest in a rural land should carefully consider their savings and income," H. said.

"In my opinion, you should not borrow more than 50 percent of the value of the land from the bank, especially if your income is not very high, otherwise you’ll find yourself in deep water with the mortgage,” H. explained.