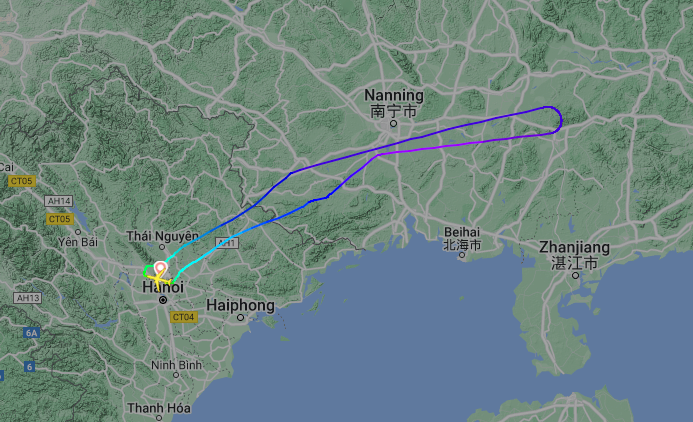 A Vietnam Airlines flight from Hanoi to Tokyo, Japan had to make a U-turn over Chinese airspace to return to the Vietnamese capital city for medical treatment for a Japanese child passenger with a nosebleed on Monday.

Just 35 minutes following its departure from Noi Bai International Airport in Hanoi at 7:35 am on Monday, flight VN384 operated by flag carrier Vietnam Airlines turned around as blood kept coming out of a ten-year-old Japanese child’s nose despite first aid given by flight attendants.

The plane, a Boeing 787, was within the airspace of Nanning City in Guangxi Province, China at that time.

The young passenger, in seat 24A, was traveling with a sister and their mother.

The U-turn decision was made in favor of the child’s health as the cabin crew evaluated that the kid could not endure five more hours to Tokyo, according to chief flight attendant Doan Thi Kim Tho.

After the Vietnam Airlines aircraft entered the apron at Noi Bai at 9:20 am the same day, an emergency medical team, staff of the airline, and the companions of the child took the young passenger to Vinmec Hospital.

The child has returned to a stable health condition and was staying in the hospital for further monitoring as of Tuesday morning, according to Vietnam Airlines.

Despite the three-hour delay, all other passengers showed their support for the cabin crew's response, according to Vietnam Airlines.